So I don’t usually go out for dinner during the week, but loved ones birthdays don’t always fall on weekends, so we had some celebrating to do. Tuesday style.  It wasn’t easy getting a reservation so late in the game (aka. Tuesday morning) but I was happy to see Bestellen, the new-ish College St restaurant from Top Chef winner, Rob Rossi, had availability.
The room is much larger than it appears from outside. There is a fair bit of seating in the front, a large bar, and another large dining room towards the kitchen.  I liked the meat aging refrigerator, as it helped break up the massive space and was interesting enough to view.
Service was a little blasé . Our server was kind, but didn’t really have much personality. He also forget to either order or bring the oysters we had ordered (I may have been the only one who noticed this, and I think after apps we were already getting full, so I didn’t bother bringing it up).
But let’s get onto food. Bestellen has an extensive  list of Bourbons, and a pretty delicious looking cocktail list.  We enjoyed a few glasses of wine, a Mint Julep and for me, a cucumber and lime flavoured cocktail called the Scarlet.
As for food, we decided to start with a variety of small plates and then move on from there. We tried: 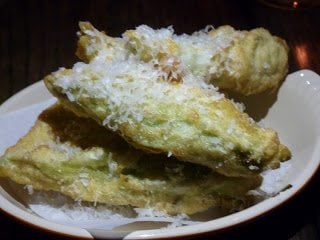 These were super crispy and tasted like biting into crispy air (in the best way possible).  Even though I do tend to like salty foods, I did find them to be a bit oversalted after the Parmesan got factored into the mix, to the point that if I closed by eyes I might mistake the flower for a super salty potato chip (a good one, though). 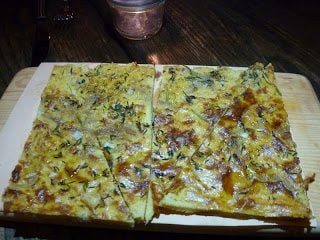 Farinata is like an unleavened pancake made out of chickpea flour, and this one was seasoned with Mediterranean flavours. It kind of reminded me of polenta, but with a more eggy-custardly consistency. It was interesting, but I probably wouldn’t order it again as I found it to be a little bland and underseasoned (in contrast to the aforementioned blossoms). 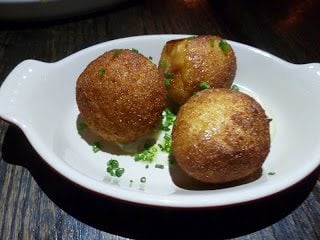 These too were good but not great. The menu listed corn, but I couldn’t detect the flavour or texture anywhere.  Even aside from the corn issue, while the risotto (and cheesy filling) was delicious and well seasoned, the exterior of the ball wasn’t crispy.  It was kind of disappointing because what I love so much about arancini is the juxtaposition of the super creamy soft center and the crunch attack going on outside. It just didn’t quite come together for me on this one. 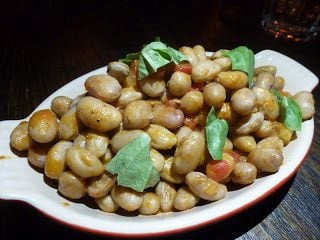 These were simple, rustic and delicious.  The beans were cooked and seasoned perfectly, sweetened with delicious tomatoes, and refreshed with the nice bright flavour of basil.  Definitely a favourite dish, and something I might try to whip up at home. 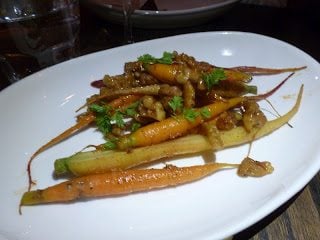 This one was probably just okay for me. The carrots were perfectly cooked (which I find a lot of restaurants can’t achieve), but the dish lacked flavour.  It could have really benefited from some acid, or sugar, or chili or even some salt. Anything to enhance and complement the successful cooking technique. 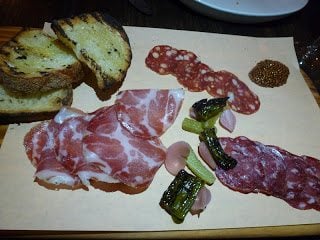 A nice simple charcuterie board, but nothing I haven’t tasted elsewhere. I did like the sweet and sour pickles, though, especially the radish. 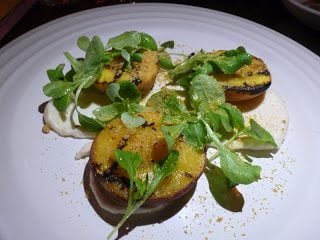 Now this was a stand out dish.  The sweet mascarpone provided a lusciously smooth foundation for anchoring the rest of the dish. It’s inherent buttery texture was perfectly complemented by the delicate mache greens and the tender grilled peach.  The golden grilled peach was sweet, wildly juicy and yielded easily to the knife and fork, saving me the trouble of trying to chase it around my plate. All of those dainty textures and mildly sweet flavours were nicely balanced by a dusting of savoury ground almond, and the herbacious element of basil.  A really delicious summer salad, and definitely something I would try again. 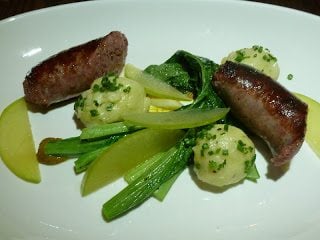 Another excellent dish.  The sausage was impossibly juicy and had big bold flavours, as its fat was nicely tempered by the acidic and sweet apple.  Although I found that the sausage was maybe a bit too abrasive for the delicate dumplings, their flavour and texture were superb.  They were soft, and cushiony and perfectly seasoned.  I was pleased that the mustard was not too pungent and excessive in portion, as it would have otherwise overwhelmed the dumplings.  And I really enjoyed the mild peppery bite of the mustard greens, which was cut appropriately by the apple as well. 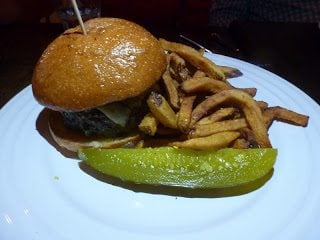 Definitely a great burger. It was juicy and meaty, with a perfect amount of sweet and tangy onions to cut the richness.  The frites were also great- super crispy, well seasoned and served with a spicy tomato ketchup. 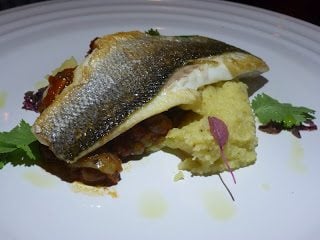 I thought that this was pretty small portion considering the size of the burger (and the fact that the Bratwurst was probably bigger and was listed as an appetizer). And while we all agreed that they went a little heavy handed on the salt, the fish was cooked nicely, the potatoes were smooth and hearty, and the sweet and tangy caponata was big on flavour. 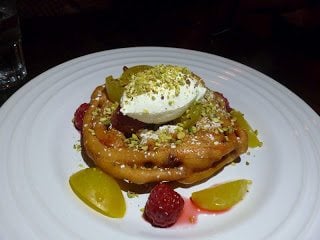 For something as inherently delicious as funnel cake, I was semi disappointed. The cake itself didn’t have any of those really delicious crispy bits, and the batter tasted a little bit bland.  The whipped cream and pistachio crumble were both on the savoury side, and I felt that the few plums and berries were not really sweet enough to leverage the rest of the flavours.  While it may not have been as elegant, I think this definitely could have benefited from some type of couli, sweet sauce, or even some dusted powdered sugar. 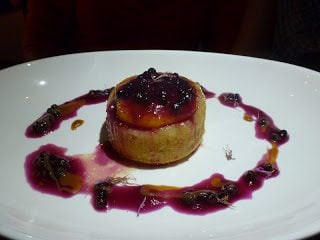 This dessert was probably better, but could have still used a bit of work.  I loved the browned butter caramel, but could have maybe used more of it to balance the slightly bitter, herbacious quality of the elderflower berries. And while the peach was gorgeously tender, juicy and sweet, I found the cake below to be a little dry.  In general, a good dessert but not great.

So I apologize but I never got my hands on the bill to see what all went down. However, from looking at menu prices, I think it’s all pretty fair.  While Bestellen is not really close to home for me, I would consider returning as the menu evolves and the kitchen and staff continue to work out some consistency kinks. 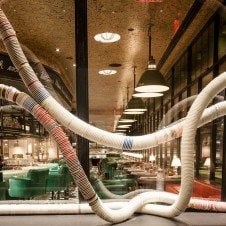 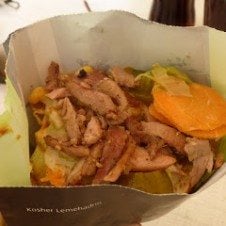