Well, last week was a nightmare at school. I was working super long hours trying to finish my damn Statistics assignment and all I could think of was how excited I was for the weekend.  Not only did I know I’d be hitting up Barque with my amazing family, but I got to schedule a date night.  Now, if I know how to get myself into an argument with my partner, it’s by booking a dinner reservation outside the downtown core.  Let’s just say, these arguments are not exactly irregular (a brief scan of my blog posts will tell you that!)  Thankfully,  even if it does cause a little grumbling about the schlep, it almost always is worth it, and on the cab ride home I get to say “see, aren’t you glad you took this $20 cab ride for dinner?” This past Saturday, after a long day of homework and celebrating an engagement in Thornhill, we made the trek to Queen W and Dufferin to check out the semi-new (and hugely buzz-worthy) Chantecler.  For those who want the really short story, I got a big kudos for the pick (despite the schlep) in the cab ride home.
So why was I so adamant about the trek? Well, following the opening of Momofuku, there has been a lot of chatter about the Asian-themed “Lettuce Sundays” held at Chantecler every Sunday night.  These lettuce wrap dinners have gotten rave reviews across the board (well, multiple boards), leading to a few good leads on their usual menu, as well. If I have learned anything about navigating the Toronto dining scene, it’s to be on top of these sorts of leads.  I knew I had to get into Chantecler for dinner before the place got so hot, they had to start turning diners away and sending them over to their [crazy busy] neighbours, Grand Electric.  Oy vey.  So that is what I did.

We arrived in time for our 8:15 reservation (maybe a bit early because I told you-know-who it was for 8 pm so that he would actually be on time- and yes, this early thing is an actual miracle in our relationship), and were greeted and shown to our seats at the bar.  I personally really like sitting at the bar (I have explained this elsewhere on the blogosphere, but to put it bluntly- chatting with the bartender is great when you run out of things to say to your date).  However, I wanted to just mention that when I made the reservation, I was not informed or asked about being sat at the bar rather than a table (which are very few, by the way).  I know some people would not accept a reservation if they knew they couldn’t sit at a table, so if you are one of those people, make sure you do request and inquire about where they intend to place you!
Service was incredibly friendly, casual, professional, attentive and everything else good. Cutlery was promptly positioned and removed between courses, dishes were adequately described, courses arrived promptly and appropriately spaced, and most importantly, sassy smiles were passed around like share-plates.  It was just an all around good experience.

We started with a couple of cocktails.  For him the Buckwheat Julep (Buckwheat infused Bourbon, Mint and Bitters) and for me the Gin and Grapefruit Tonic (Bombay Sapphire, House Tonic, Grapefruit).  The Julep had an lovely nutty fragrance livened up by the fresh mint, and the tonic was a perfect balance of bright acidity and mild sweet tonic. Loved this.

So the way the food works at Chantecler (for the regular, non-Lettuce Sundays menu) is that the dishes are meant (or at least encouraged) to be shared.  They arrive one my one, in an order deemed appropriate by the chef based on flavour progressions, rather than the strict appetizer- main type orientation. 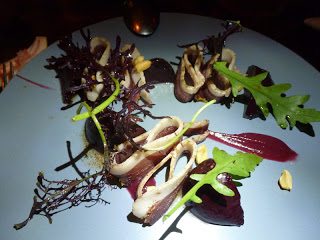 A solid dish. I think we were expending a cooked breast, but regardless it was tasty.  I loved the  smokiness of the charcuterie against the sweet, mildly acidic flavour of the beet. 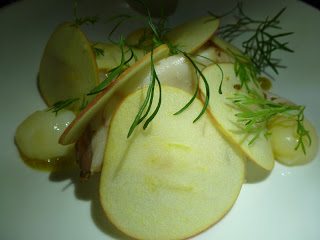 Probably the better of the two appetizers.  The pork was rich and fatty, but not chewy or unpleasant.  The soft poached quail eggs burst effortlessly to produce a rich and decadent sauce.  With all of this fattiness on the plate, I was grateful for the kick of heat from the jalapeno, and the sweetness and acidity lent by the crispy apple slices. 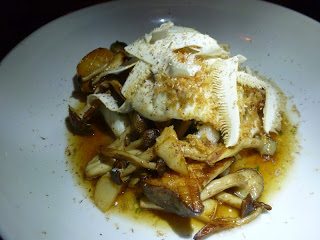 By far the best savoury dish of the night.  It was easily one of the best dishes I have had this year.  The mushrooms lent a gorgeous earthy note, lending a satisfying supple texture. In contrast, the celeriac had been pureed and then expelled from an aerator to create a light, mildly sweet and slightly nutty air.  The star of the dish, however, was the perfectly cooked cod, garnished with a dusting of buttery salty breadcrumbs reminiscent of crushed potato chips. In the words of Ina Garten, “how could this be bad?” 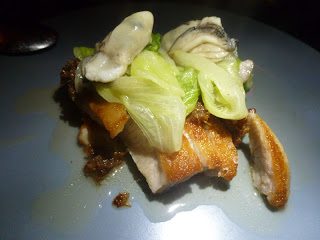 We deemed this dish “The Ultimate Kosher Feast”.  All jokes aside, it was pretty damn good.  The oyster lent an interesting textural juxtaposition against the super crispy skin of the pork, and the XO sauce (a Chinese sauce traditionally made of dried seafood, chili, garlic, sometimes ham etc) offered a nice salty hit.  My only criticism was that the wilted lettuce kind of threw me off my enjoyment-game.  While I normally love cooked lettuce, the texture (kind of like chewing on a rubber band) kind of masked the tenderness of the pork, and made it taste a little overcooked.  When eaten separately (as I quickly learned to do), the dish was spot on. 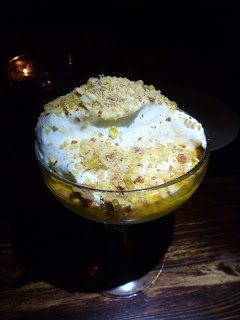 Well, let me just say that Chantecler knows how to do dessert.  When I read their menu online, I honestly wasn’t too enthused by the dessert offerings, and ordinarily, that’s enough to deter me from a restaurant.  Am I ever glad I gave it a shot because this dish was absolutely killer.  Sea Buckthorn (so I learned) is a sour berry that the chef pureed into a thick sauce, mixed it with a few tiny droplets of orange blossom puree, topped with a silky and fluffy soft meringue, and dusted it with crushed almond praline.   The result was a masterpiece of texture and flavour.  The smoothness of the puree was pleasantly interrupted with little pops of fragrant jelly.  Both of these components offered a satisfying tart base note, tempered by the mildly sweet meringue and the nutty crunchy candy garnish.  Don’t tell you-know-who I told you, but he actually licked the bowl- like tongue in goblet- I wish I got a picture.  For a man who rarely even eats desserts, this was a milestone. 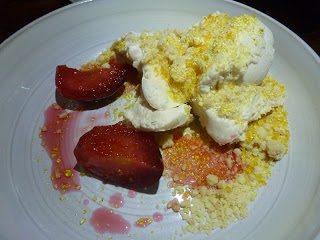 Another flawless offering. Just looking at the picture is making me weep. Served very cold, the ice cream had a distinct savoury element that I can only describe as a less sweet, more refined version of peanut butter.  The shortbread cookie crumbs held their shape, and along with a generous garnish of candy shards, provided the sweet to complement the Buckwheat’s earthy undertones.  The plum, cooked sous vide in nothing more than a little sugar brought a refreshing element of acidity to the plate. While we refrained from using tongue, this plate also got cleaned pretty good.

So following dinner, the bartender graciously offered us up a complementary dessert shot, featuring Amaro, Bourbon and Bitters.  I was a bit apprehensive (I never bring a shot glass to my lips without at least a little reflection), but it proved to be delicious. Like the bartender said, just sweet enough for the lady.

So after 2 apps, 2 mains, 2 desserts, sparkling water, 3 cocktails, 2 cappuccinos, I think the bill was about $160 including tax and tip.  An excellent meal considering the quality.  I would however say, that if you arrive hungry (like we did), then you may want to order another dish, as we both left a wee-bit peckish.  Regardless, it was one of the better meals I’ve had lately, making me incredibly interested in checking out their Lettuce Sundays before it’s popularity explodes. 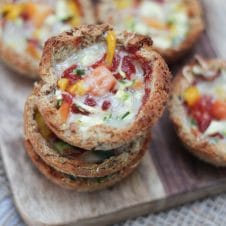 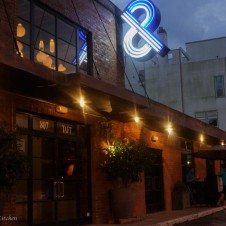 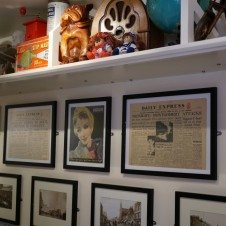