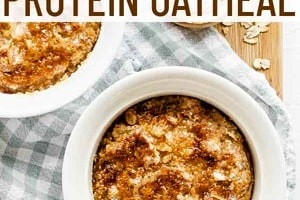 This High Protein Oatmeal with Crème Brûlée crackle is a delicious and nutritious morning-friendly version of the decadent dessert!

I think of oatmeal as the ultimate comfort food. It probably has to do with the fact that I literally grew up on oatmeal so its tied to nostalgia from my childhood. But regardless, I can always count on oatmeal to make me feel good both emotionally, and physically too! Plus, it’s just so dang delicious.

So if you are also part of the oatmeal fan club, you’re gonna love this high protein oatmeal with crème brûlée crackle! This recipe literally tastes like eating dessert for breakfast, but is packed with protein to help fuel your morning.

Why This Recipe Works

Besides the fact that this recipe combines the comfort of oatmeal with the decadence of crème brûlée (need I say more?), here are just a few more reasons why I KNOW you’re totally gonna dig this recipe.

Rolled Oats – I prefer using old fashioned rolled oats rather than steel cut because they tend to cook faster and hold more liquid. If you’re in a time crunch though, you can also try using instant oats and decrease the cook time but the texture won’t be quite the same.

Egg whites – Without using any protein powder, I like to boost the satisfying power of this high protein oatmeal by whisking in some whipped egg whites to yield a fluffy texture. If this is your first time experimenting with whipped egg whites in oatmeal, then boy are you in for a treat!

Brown Sugar – to get the irresistible crème brûlée crackle, we sprinkle a bit of brown sugar on top of the high protein oats and torch the crap out of it! In other words, we get it all nice and brown like you would with a classic crème brûlée.

How to Make This Recipe

Step 1: In a small pot, combine the oats, water, salt, cinnamon, vanilla bean seeds and the residual vanilla bean pods. Bring the mixture to a simmer over medium-high heat, then reduce the heat to medium. Stir the pot occasionally until the oats have absorbed almost all of the water but are still very moist and thick (about 3-5 minutes).

Step 2: In a bowl, using a hand mixer beat the egg whites until they froth up.

Step 3: Add beaten egg whites to the pot with the oats. Cook, stirring constantly until the mixture is creamy and fluffs up- about 3 minutes. Remove the vanilla bean pods and add maple syrup, to taste. When ready to serve, top with brown sugar. Using a blow torch, brulee the top of the oatmeal bowls until caramelized and golden and dig in!

While you may be surprised to see that we are using water instead of milk to make this high protein oatmeal, there is good reason. While I am not above using milk to whip up a batch of the good stuff, I take the texture of this oatmeal recipe very seriously! I mean, this ain’t your average oatmeal recipe… its Crème Brûlée oatmeal! So it deserves the very best VIP treatment.

With that said, using water tends to yield a creamier bowl of oatmeal which is on par with the texture of a Crème Brûlée dessert. On the other hand, using too much milk can quickly turn the texture of this recipe thick and sticky, and that just won’t do this time around. But if you insist on adding milk to this recipe, i’d suggest adding just a splash!

What can I use instead of egg whites to make this vegan friendly?

You could try substituting it with aquafaba (which is the leftover liquid from a can of chickpeas) and whipping it the same way you would the egg whites, however it doesn’t have much protein. Otherwise, you could omit the egg whites, and instead of cooking the oats with water you can use a high protein plant-based milk like soy milk.

What if I don’t have a blow torch?

If you have oven safe boils available you can try broiling it in the oven instead but make sure to keep a close eye on it because it can burn crazy quickly!

Can I make this ahead of time?

Absolutely you can! You can try making this the same way you would make overnight oats and adding the crème brûlée crackle before serving.

Now I want to know – What are some of your favourite comfort food breakfasts? 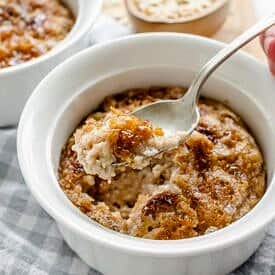 Have you tried this Crème Brûlée high protein oatmeal yet? What did you think? 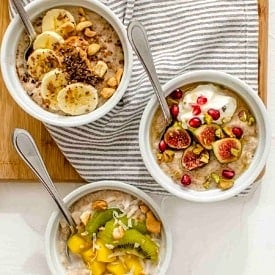 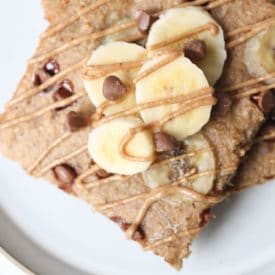 This website uses cookies to improve your experience while you navigate through the website. Out of these, the cookies that are categorized as necessary are stored on your browser as they are essential for the working of basic functionalities of the website. We also use third-party cookies that help us analyze and understand how you use this website. These cookies will be stored in your browser only with your consent. You also have the option to opt-out of these cookies. But opting out of some of these cookies may affect your browsing experience.
Necessary Always Enabled
Necessary cookies are absolutely essential for the website to function properly. This category only includes cookies that ensures basic functionalities and security features of the website. These cookies do not store any personal information.
Non-necessary
Any cookies that may not be particularly necessary for the website to function and is used specifically to collect user personal data via analytics, ads, other embedded contents are termed as non-necessary cookies. It is mandatory to procure user consent prior to running these cookies on your website.
SAVE & ACCEPT
2810 shares