In this edition of Outside Abbey’s Kitchen, we dive into Southern comfort food with a sassy twist with Chef Trish Gill.  After time at the Queen and Beaver Public House and Beast (both of which do some damn good Sticky Toffee Pudding), she landed the gig as Chef de Cuisine at Dundas West’s The Dock Ellis.  Positioned as a sports bar, but with a pretty bad ass menu, the place has received significant buzz since it opened at the end of last year.  And after making my way through most of the snack-based menu recently, I was confident I knew exactly why. One of the dishes, the Sweet Potato Stuffed Corn Bread with Bacon Dressing, really caught my eye, so I asked Chef Gill to walk me through the steps.  Note to self- these puppies are for sure making an appearance at an upcoming holiday meal.  Follow up note to self – make sure said holiday is not Passover.

Here’s what I learned in this fabulous woman’s kitchen.

-When she was a wee three years old, Trish’s mom caught her making French toast at 5 AM in the morning. I was assured that she was quite successful with her ambitious endeavour (bravo, girl!).  The rest is culinary history.

In goes the dry!

-When asked about how we can inspire more women to take up space in the professional kitchen, Trish suggested that we need to band together, speak out, be a positive role model and support other women in each others’ goals.

-One of her mantras in the kitchen is to lead by example. If she’s not willing to bust ass and put in the work, she can’t expect to inspire any of her staff or co-workers to do it either.

-If given a night off on the town for a good meal, Trish would be off to check out the Oxley in Yorkville or Bero in Leslieville. Too tired to go out? Sounds like delivery from Banjara Indian Cuisine on Bloor W. is in order!

-Not surprisingly after a history at the Queen and Beaver, Beast and now the Dock Ellis, Trish describes her culinary style as comfort food, with a mixture of Southern and classic British influence (her family is Scottish). Hmm… maybe we’ll start see some pretty cool fusion coming out of her kitchen… Chicken-Fried Haggis, anyone?

-Trish’s inspiration for this dish came from a few sources. As previously mentioned, she’s a huge fan of Southern cuisine so she’s been making delicious cornbread for a good while now.  But at Alexandra Feswick’s the Dinner Party pop-up event last year, she decided to stuff her cornbread recipe with braised oxtail and serve it in individualized portions. The result was a series of rave reviews that inspired her to play with the recipe a little more (like by using sweet potatoes instead of meat).  The bacon dressing was born out of the necessity for balance- the sweet corn bread and sweet potatoes needed something savoury to temper them down. And what do we all think of when we want something delicious and salty? Bacon, of course. Bacon makes everything better- especially when you’re serving them up in a bar. So Trish’s sous chef continued to tell me that the recipe for the bacon dressing really came about in one of those “let’s clear out the fridge” kind of moments. Those are always the best recipes because you’re so committed to making it work. And damn, did it ever work.

-There are many different types of cornbread in my experience- each with their own unique flavour and texture.  Trish’s cornbread is exactly the type I like. It’s more fluffy, sweet and cake-like than grainy, or super savoury like bread.

-If you wanted to make it more savoury and spicy, you can keep the seeds and ribs in the jalapeno (or just use more) but I think it tastes perfect just as is.

Drizzle that little bit of goodness in

-As previously suggested, Trish made this dish with oxtail in the beginning so it’s totally your call what you put inside. You can try other vegetables like regular potatoes, creamed corn, mushy peas or carrots, explore the world of cheese, or go the meat route with pulled pork, braised brisket or BBQ chicken. Heck, I can even imagine putting in a savoury preserve like a bacon jam – because who has rules for how much is too much bacon?

-You can buy these little molds from any kitchen goods store but well greased muffin tins will also do. In a pinch, you can also do this in a well-oiled cast iron skillet. Just get the skillet nice and hot, layer in the filling and bake until cooked through.

-Letting the batter rest for 30 minutes helps the grains hydrate so you don’t end up with dried out bread.

-You can keep the bacon dressing in the fridge pretty much as long as the dairy (the sour cream or crème fraiche) you used is good (so check the best before dates before you use!)

-If you want your little muffins to stand up like they do in this picture, simply level them off with a serrated knife before you pop them out.

Ready for the oven

-So how does it taste? Well, read my full blog post if you want the details, but in short- really, really deliciously good. I love the combination of the sweet fluffy cornbread with the moist filling and the savoury creamy dressing. Heaven.

Thank you Trish from The Dock Ellis, for sharing this delicious recipe. For more information about the restaurant, check out their website and twitter for the latest scoop.

One of the dishes, the Sweet Potato Stuffed Corn Bread with Bacon Dressing, really caught my eye, so I asked Chef Gill to walk me through the steps.

Serves 24
Ingredients
Sweet Potatoes:
2 sweet potatoes
Pinch each of Salt and Pepper
Cornbread:
1 cup Butter, tempered and melted
1 cup Sugar
4 Eggs
2 cup Buttermilk
1 tsp. Baking Soda
1 tsp. Salt
1 tsp. Garlic Powder
1 tsp. Onion Powder
2 cups Flour
2 cups Cornmeal
1/2 cup Jalapeño, cut brunoise (or shallots, or sweet peppers)
Bacon Dressing:
1/2 cup Bacon, diced
1 cup Mayonnaise
1 cup Sour Cream
1-2 cloves of Garlic, minced (depending on how big and how much garlic you like)
1 Tbsp. Dijon Mustard
1/3 cup Red Wine Vinegar
Salt and Pepper to taste
Instructions
Sweet Potatoes:
1.Preheat your oven to 400 F.
2.Prick the potatoes in several places and place on a foil lined baking sheet. Bake for about 40-60 minutes, or until very soft when pierced with a knife.
3. Mash with a food mill, ricer or potato masher and season with a pinch each of salt and pepper. Set aside to cool.
Cornbread:
1. Preheat your oven to 375 F.
2. Mix together the butter, sugar, eggs and buttermilk.
3. Gently fold in the baking soda, salt, garlic, onion, flour, cornmeal.
4. Add in the jalapeno.
5. Allow the batter to rest for about 30 minutes before using.
Bacon Dressing:
1.In a medium pan, cook the bacon until its very crispy. Transfer to a paper towel lined plate and reserve the bacon drippings.
2. In a medium bowl, stir together the mayo, sour cream, garlic, Dijon, red wine vinegar and the residual bacon drippings. Gently fold in the crispy bacon. Taste, and season with salt and pepper as desired.
Assembly
1.Transfer a spoonful of batter to silicone pop over molds or a create a layer of batter in a preheated cast iron skillet. Top with a heaping spoonful (or layer) of sweet potato puree and then finish with one more spoonful (or layer) of the batter.
2. Bake for 18-20 minutes for cast iron skillet or 25-30 for silicon baking molds.
3. Unmold the cornbread, and dip or drizzle with the bacon dressing. Enjoy! 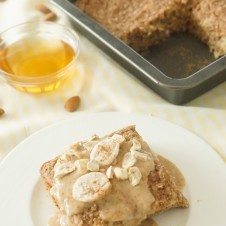 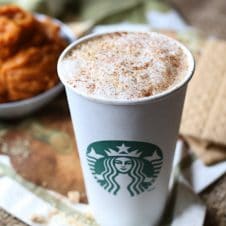 Marketing Permissions: Abbey’s Kitchen Inc. will use the information you provide on this form to be in touch with you and to provide updates and marketing. You can change your mind at any time by clicking the unsubscribe link in the footer of any email you receive from us, or by contacting us at [email protected]bbeyskitchen.com. We will treat your information with respect.