Nine out of ten foodies agree that Yorkville is kind of a culinary wasteland. This really became apparent in a recent CH thread where a visitor requested a good spot to eat in Yorkville and we basically all told them to forget it. I’m not sure why all of the upcoming chefs are steering clear of the neighbourhood… its busy, lots of walk-by traffic, a tonne of top hotels, and people with money. Sounds like a successful business opportunity to me. However, for all of those same reasons, I guess Yorkville kind of lacks the sexy, young, hip feeling of lets-just-say Ossington or Queen W, where people like me find myself schlepping to on a weekly basis for good eats. That’s why I was pretty excited when I heard that the guys who run the Queen and Beaver were opening a similar joint in Yorkville.
The decor is similar to the Q B. Its very British, and very comfy, with a nice big fireplace that I know I am going to be all over come fall. The servers were all very cute, and attentive, and filled out water glasses consistently.
They have a great drink menu, and I wanted something sweet, so I had a blackberry mojito which was really delicious. The SO went with the Whisky Sour, which they did really well as well with lots of frothy egg whites (the one he ordered on Friday at Scarpetta had none- aka. failed).
The menu is very upscale British. Yes, you got your classics like meat pies and fish chips, but there are also a lot of interesting offerings like venison and guinea fowl. In the mood for comfort food, we stuck close to what I knew they might do best. 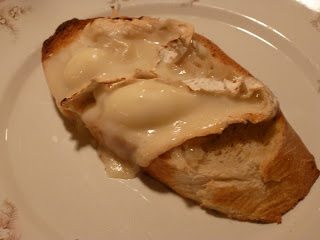 The brie was a stronger one, so it could have used a bit more honey to balance it out. But in general, I loved this, and it was a great snack for any time of day. 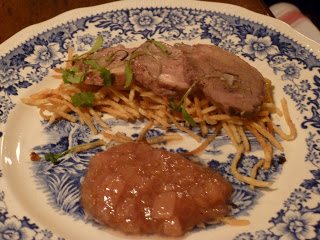 Loved those little hickory sticks, it added a really nice textural contrast. It also lent a delicious salty note to counter the sweet chutney, so the dish as a whole was really well balanced. 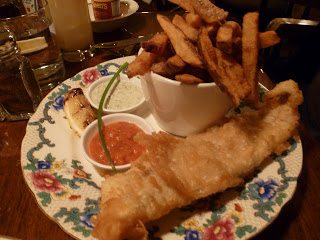 Really nice light batter and perfectly cooked fish, but the star of the dinner was no doubt the chips. We both agreed that these were some of the best fries we’ve tasted in a long time. They reminded me of the chip truck we visit on our way up to the cottage, which is always an awesome food memory to channel. they were super crispy outside, yet really fluffy and moist inside. Really, it doesn’t get much better than this.

Cheddar and Bacon Burger and Chips 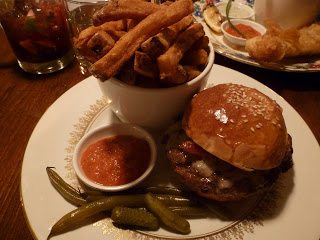 Now I’m not one to order a burger at a restaurant, but I was so glad that I did because this one was really good.  Not a huge burger, but perfectly sized if you want to thoroughly enjoy those fries. I appreciated that they will cook them to the diners’ requested temperature, so I went with medium (but would try medium rare next times). Even at medium, it was incredibly juicy and flavourful with just the right amount of fat. The cheese added a nice sharp bite, and the bun (while maybe a wee bit small for the patty) was buttery and delicious. My only complaint would be that the thick-cut bacon on top could have been cooked a little bit more for me (I actually don’t like crispy bacon, but because it was so thickly cut, a lot of the fat had not yet rendered so it was a bit chewy). 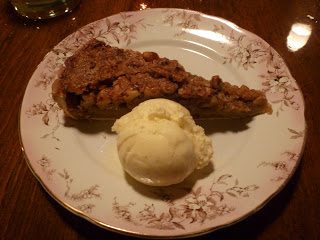 So I went with the sticky toffee pudding last time at the Q B, which I adored and you all know its my favourite dessert. However, I do try not to re-order (and thus, re-review) the same dishes, so I opted for the walnut maple tart. While not as good as the STP, it was really a delicious dish. The tart shell itself was flaky and perfectly sweetened (and I usually don’t like pie/tart crust), and I loved the intense crunch that came from the caramelized walnuts on top. I could have used a bit more chewy-gooey factor from the filling (mmm like my favourite butter tarts from Flaky Tart), but you know, I’m not going to be too picky. 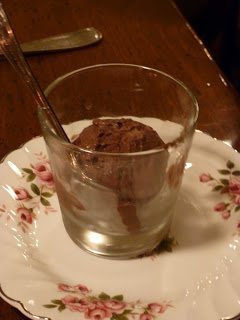 Just a wee scoop for the man who’s not much for dessert. A very rich, dark chocolate flavour with a creamy consistency. I was a bit disappointed that the Oxley didn’t have all of the cool ice cream flavours offered at the Q B (they only had vanilla, chocolate and blue cheese cherry), but maybe they will work those in slowly.

So for 3 cocktails, 2 apps, 2 mains and 2 desserts, the bill was $130 including tax and tip. Pretty damn good for the amount of food we got. This is definitely our new choice for drinking and eating casually in the hood. Patio in the summer, fireplace in the winter. 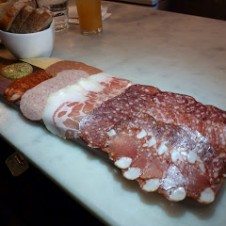 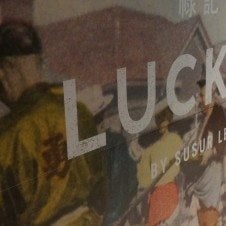 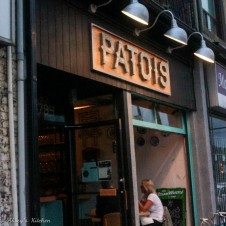