-Casa Lucio was opened in 1974 in the space once home to the hundred-year old Meson El Segoviano.  This is where a 12-year old Chef Lucio Blazquez began work, and later became the owner and executive chef.

-The restaurant is a celebrity hangout- from King Juan Carlos, to Bill Clinton to the stunning Penelope Cruz- Casa Lucio is known for its famous clientele. It’s also been made famous as the place where Aznar and Bush’s wives had lunch while alliances were being formed.

-The ancient Madrileno dining room has been well preserved since its days as Meson El Segoviano.

-From the outside, or even from the view of the bar in the front, the space was much larger than I would have ever imagined.

-The restaurant boasts a classic Spanish vibe with lanterns and antique photos on the white walls between panels of old dark wood, and old arches separating the various rooms. The bar even features various loins of ham hanging from an old beam above the booze in the bar.

-With low ceilings and tightly packed tables with patrons sat at every one, the space feel intimate, buzzing and cozy.

-The demographic on a Sunday night was almost all locals- most of which came in large groups of families or friends. It was also obvious that these were almost all regulars as they all hugged and kissed the staff.
-The biggest sign of Casa Lucio’s institution-like setting was the sight of Lucio himself- an adorable smiling old man who popped by every table and shook every patrons hand. I hope that man lives forever feeding on the joyful energy in that room.

-Service could best be described as old school hospitality- casual, yet professional and above and beyond thoughtful.
-When we arrived, our name was checked on the list and we were brought back to our seats. Our first server (an older gentlemen) could only speak broken English but did his best to point out this recommendations or motion his reactions.
-The drinks and food came promptly after so there was never any uncomfortable waits.
-After we had received our first course, we were asked very kindly by the English-speaking maître D if we would mind moving to another table in a different room as one of their tables of 4 just doubled in size. This is certainly no big deal to me, especially in a casual joint, so we happily obliged. As we got up to move our plates, the staff were insistent we didn’t lift a finger so that they could transport it all.

– We were then tended to by another server who’s English was a trifle bit better. To apologize for the inconvenience, he then brought us out a complimentary side dish of potatoes and later, a free dessert. A very nice gesture.
-Other elements of good service were all on point. Dishes and cutlery were removed between courses and for the most part, I appreciated the pace of the meal. We were in and out within about 1 hr 15 minutes, which would have been more like 50 minutes but the time between asking for the cheque, receiving the surprise dessert and then asking for the cheque again took a little more time. But still, one of the fastest meals we had all trip.

-I never was brought or shown a drink list so it’s hard to comment on the range of offerings. We asked what red wine was available by the glass and was given their house wine – an agreeable Cune Rioja for 3€. Not sure I would love their single white selection, I opted for a generously poured Bombay sapphire gin and tonic (10€).

-Lucio is celebrated for its local home-style cooking, specifically of their steak and Lucio’s Scrambled Eggs. The menu rarely changes, allowing locals to return to their familiar favourites time and time again.

-A little word to the wise- don’t eat the bread that’s on the table when you sit down. For one, it’s stale and not worth the stomach space (trust me, you’re going to need it), and second, they actually charge you 3€ if you eat it. I didn’t even notice until I went through the bill writing this review so consider yourself warned.

A massive portion of perfectly charred peppers with an addictive layer of crunchy coarse salt. I also loved the French fry-like potatoes underneath.

Again with the family style portions- unfortunately I found the peas here over cooked and more mushy than they were fresh.

These potatoes were perfectly cooked and coated in a remarkably flavourful herb oil. While I probably wouldn’t bother ordering it considering how much potatoes were served with the meal, it was a tasty (free) dish.

This is apparently the signature dish and was literally on every table in the restaurant so naturally I had to try it. While I love the concept (scrambled eggs on lightly fried potato sticks), I found the dish a touch bland and in need of salt- or hot sauce- this would have been awesome with a dash of Franks. Alas, nothing that a little Heinz ketchup couldn’t liven up!

Seasoned simply without any fancy sauces, compound butters or rubs, but it was a flawless steak. Perfectly cooked, flavourful and blessedly tender.

More of a moist spongy bread pudding than a traditional French toast, this version featured a crunchy caramelized sugar layer to contrast the custardy bread. I also loved the mocha-rich flavour of the tiramisu ice cream.

-For the 2 appetizers, 2 mains, bread (I repeat- do not eat), 1 glass of wine, 1 cocktail and a bottle of water, the bill was 75€ ($105 CAD). Talk about a very reasonable price for an exorbitant amount of food. Not only was the meal delicious in that home style comforting way, but the service was fantastic and the space oozed that “mi Casa es su Casa” vibe. This would be the perfect place for a casual date night or to bring a larger group of family or friends. It doesn’t matter what generation you’re from, or what kind of food you like, I am confident Casa Lucio can make everyone smile.
-I would highly recommend a meal at Casa Lucio anytime you’re in Madrid, especially if you’re looking for a hearty meal for a very reasonable price. 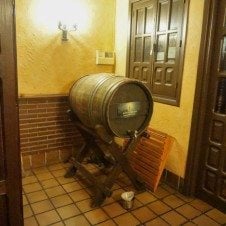 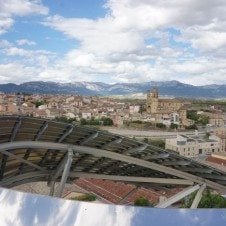