This almond crusted vegan french toast with sour cherries will quickly become your reason to get up in the morning!

Anyone that hangs out around me in the mornings knows I’m the last person to order a vegan breakfast, nevermind want to try a vegan French toast recipe. 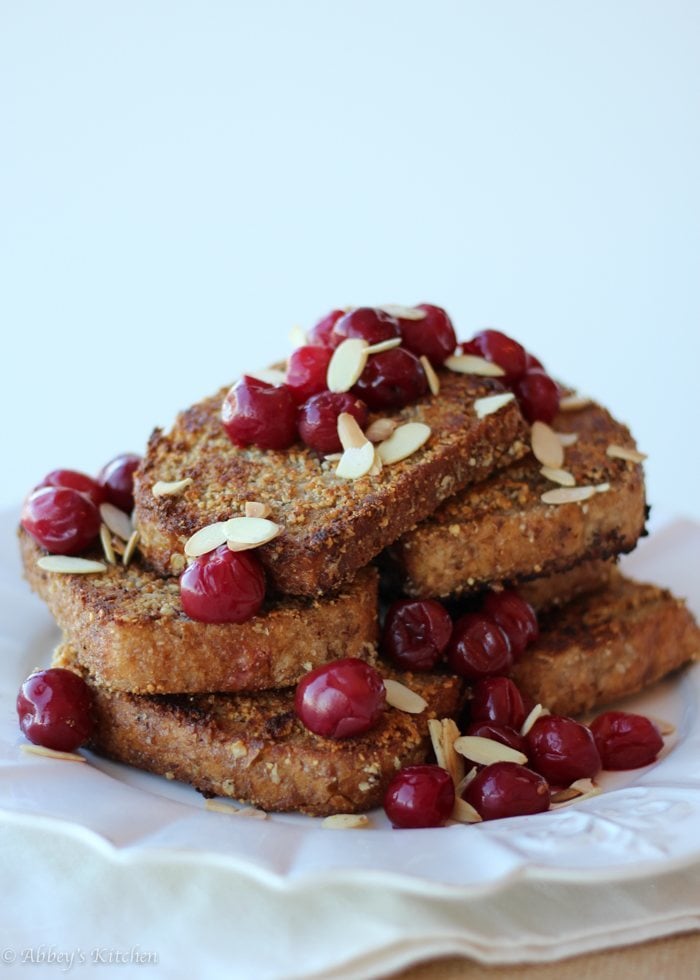 I plow through a large container of Greek yogurt every few days, love a good breakfast banger, and a gorgeous runny egg is totally my thing. So when I had a thought to experiment with flax eggs and whip up a totally dairy and egg free – yep, a vegan French toast – I was nervous to say the least. 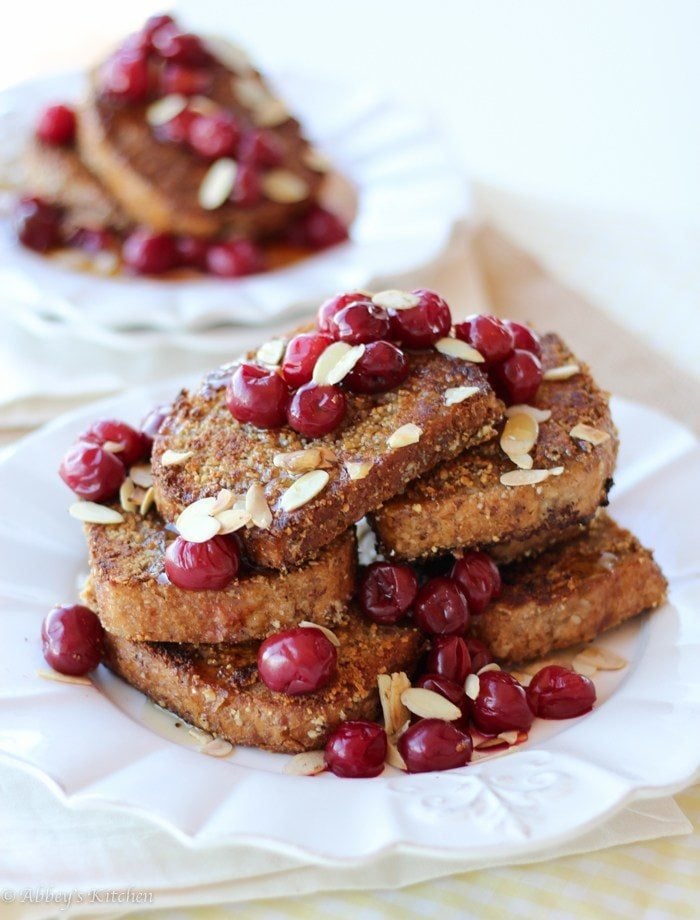 Vegan French Toast? What About the Egg?

With a bit of experimenting, this French toast recipe quickly became one of our actual favourite recipes for brunch. The key to making vegan French toast is a flax egg. If that sounds a wee bit hippy-dippy-flower-child to you. Don’t worry, I was there too. But it’s actually super easy to do. By mixing flax with some kind of liquid, the flax seeds create a bit of a binding sticky consistency similar to an egg that makes it a solid vegan replacement for eggs in an egg-dependent recipe like French toast. 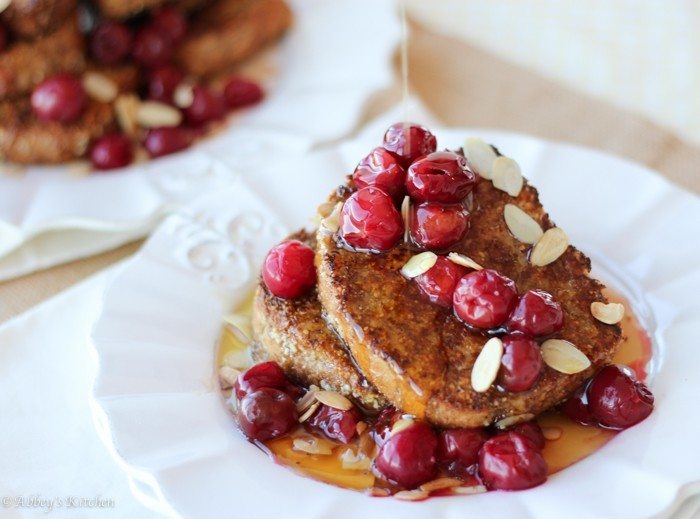 To give it a bit more texture (since it was missing out on the fat from milk and egg yolks), I added a super crispy layer of almond meal as a crust. OMG. It’s really good. I would recommend adding an almond meal crust to literally any and every French toast recipe- not just your vegan French toast! 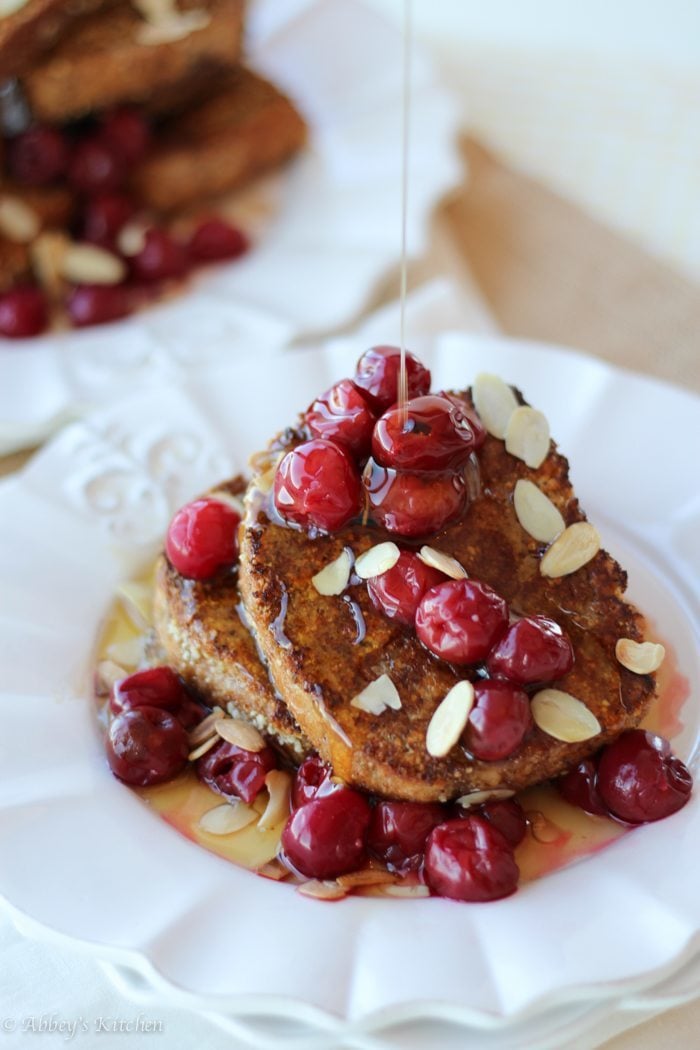 To finish, because every good French toast dish needs a finisher, I topped it with some tangy sour cherries and toasted sliced almonds for crunch factor. Almonds and cherries are a natural pairing and are so tasty together, there’s really no need for syrup. Unless you have it… then maybe throw in a little for good measure. Hey, brunch should be a wee bit decadent. 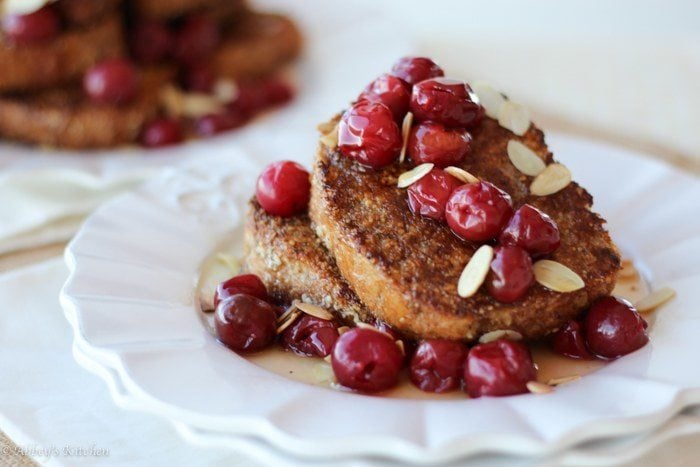 What’s your favourite French toast recipe? Would you be down for trying a vegan breakfast? Have you ever tried making vegan French toast? Leave me a comment below – I would love to hear your successes and not-so-successes. 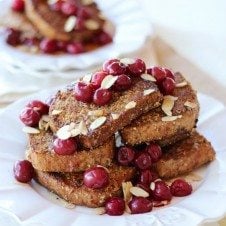 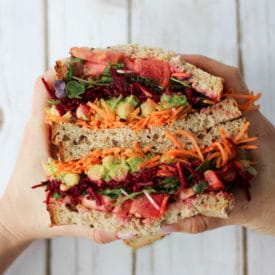 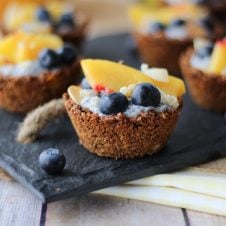 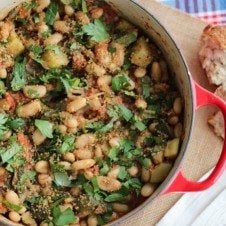 This website uses cookies to improve your experience while you navigate through the website. Out of these, the cookies that are categorized as necessary are stored on your browser as they are essential for the working of basic functionalities of the website. We also use third-party cookies that help us analyze and understand how you use this website. These cookies will be stored in your browser only with your consent. You also have the option to opt-out of these cookies. But opting out of some of these cookies may affect your browsing experience.
Necessary Always Enabled
Necessary cookies are absolutely essential for the website to function properly. This category only includes cookies that ensures basic functionalities and security features of the website. These cookies do not store any personal information.
Non-necessary
Any cookies that may not be particularly necessary for the website to function and is used specifically to collect user personal data via analytics, ads, other embedded contents are termed as non-necessary cookies. It is mandatory to procure user consent prior to running these cookies on your website.
SAVE & ACCEPT
1037 shares