I recently had an amazing dish at Mata Bar’s – a Vegetarian Quinoa Risotto (aka. Quin-otto) that was gluten free and low in fat. I was pretty determined to make my own version at home where I knew I could control the calories and fat. Because let’s be honest, I know how many calories an average meal out can pack. Spoiler alert- it’s probably more than any of us need. Even the most health-conscious options are often loaded with fat, sugar and salt, making dining out regularly and managing your weight seem like an impossible task. Trust me, I spend enough hours in the gym to testify to that. 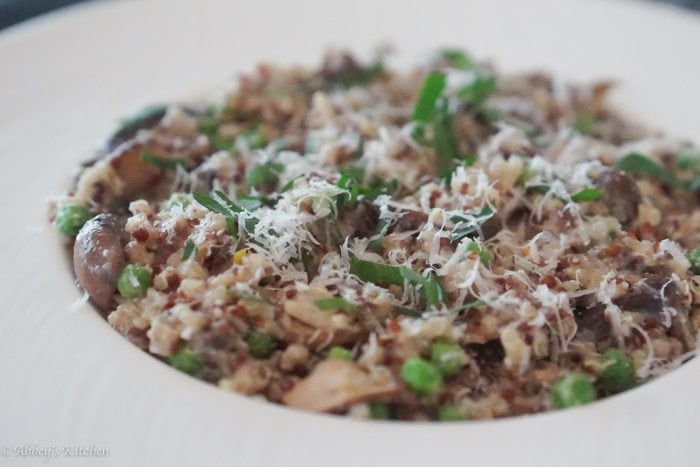 Well, to bridge the gap between delicious restaurant fare and calorie-conscious home cooking, I teamed up with Sobeys to satisfy my Culinary Cravings with a little dish quinoa risotto do-over at home. 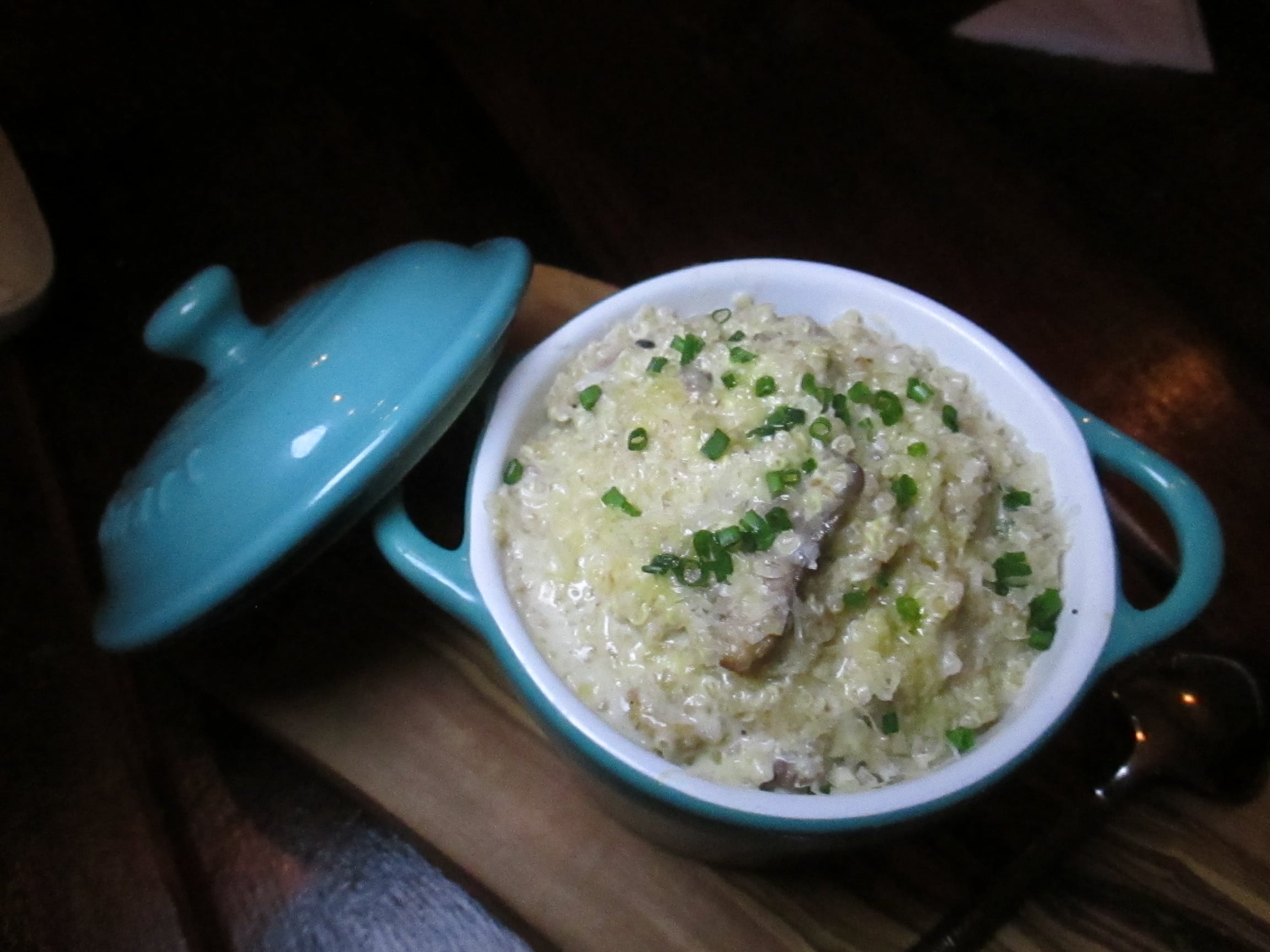 We all know quinoa is a super healthy grain- it’s high in protein and fibre, it’s low on the glycemic index and it’s naturally gluten free, so this automatically got my attention as a unique dish to try to make at home. And while quinoa risotto may sound healthy, in a restaurant, it’s sure to be packed with butter and cheese to make it creamy.  I knew I would have my work cut out for me.

But before I got down to calorie cutting, I wanted to nail the technique, so I called up Chef Felipe Faccioli from Mata Bar for the 411 on his popular Quinoa Risotto. His restaurant serves up some pretty delicious South American fare, and I knew he would be happy to help me nail this recipe. He told me that in South America, quinoa is a very popular crop so while its still a relatively new hot food here, they’ve been using it for generations in a quinoa risotto style dish called Quin-otto. 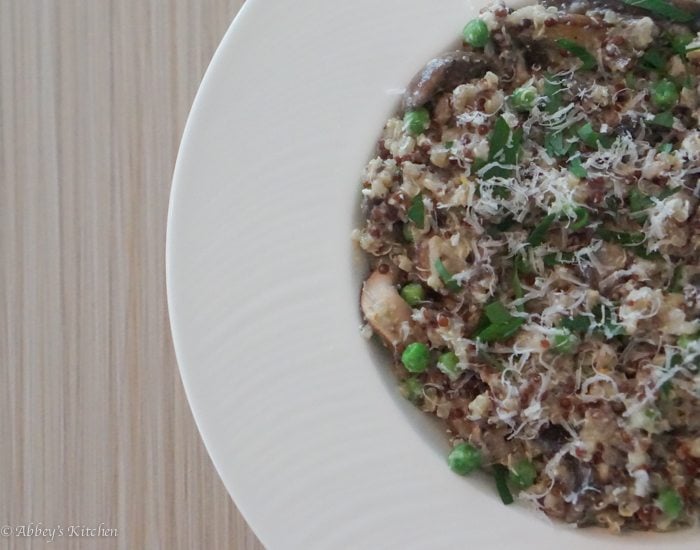 Unlike Italian Arborio rice, quinoa isn’t a very starchy grain, so slowly adding in the hot stock doesn’t do all that much. Alternatively, Chef Felipe cooks the quinoa first before making it into quinoa risotto and then makes it creamy with loads of butter and Reggianito cheese, which is cheese from Argentina that originated when immigrant Italians tried to make cheese reminiscent of their famous Parmigiano Reggiano. I love butter and cheese, but I knew I would have to cut this stuff back. On the other hand, Chef Felipe also adds huge low-cal flavour in some unique ways I was totally going to steal. For example, he makes his own mushroom stock and he grinds up porcinis and adds the powder to add big umami flavour. He also gave me a great low-fat cooking tip that even I hadn’t tried before. While he doesn’t do this in the restaurant version himself, he told me that one thing they do in South America is puree hearts of palm into a thick white sauce in place of a lot of butter or cream. How hadn’t I tried this before? I was dying to give it a go. 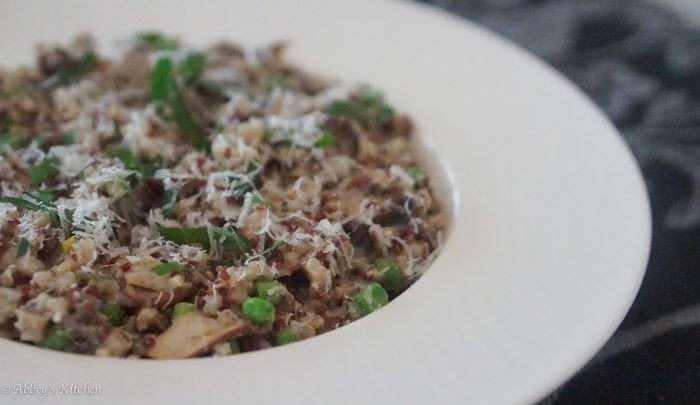 My first duty was to head to Sobeys and pick up all of the ingredients for my quinoa risotto adventures. I wanted to make a stock myself since mushroom stocks are hard to find, and generally really salty when you do. When I make my vegetable stocks, I like to lightly sauté everything in a spot of olive oil just to give a light caramelized flavour before adding in the water. Next, I grinded up the dried porcinis into a powder. You can sometimes find porcini powder but it’s way cheaper to just grind it up yourself. Then I used my stock and the powder to cook my tri-coloured quinoa (but you can use whatever quinoa you have on hand). Meanwhile, I sautéed up a variety of mushrooms that I found in the produce department at Sobeys and moved on to make the “creamy” hearts of palm sauce. This was ultimately what scared me. I gave the hearts of palm a really good rinse to get rid of the briny liquid, then pureed it with just enough milk to keep it going. Now it was time to assemble my quinoa risotto. 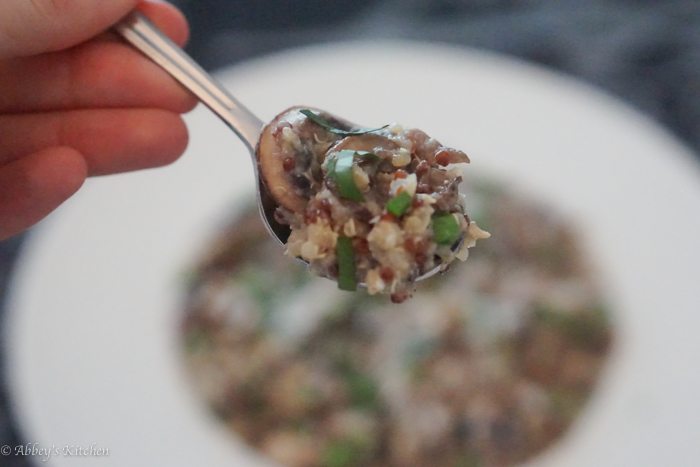 Once the quinoa was cooked, in went the hearts of palm, cheese, mushrooms, frozen peas (they thaw out in a sec), and a little extra milk to thin it out. My George- the faux cream sauce actually worked!! And no, it didn’t taste like strange acidic canned veg. Culinary Cravings satisfied!

Check out this gluten free, vegetarian recipe for quinoa risotto and let me know what you think! Do you have a restaurant dish you’d like to see recreated? Leave a comment below or send me a tweet with the hashtag #BetterFoodForAll – you might just see your request on the blog! 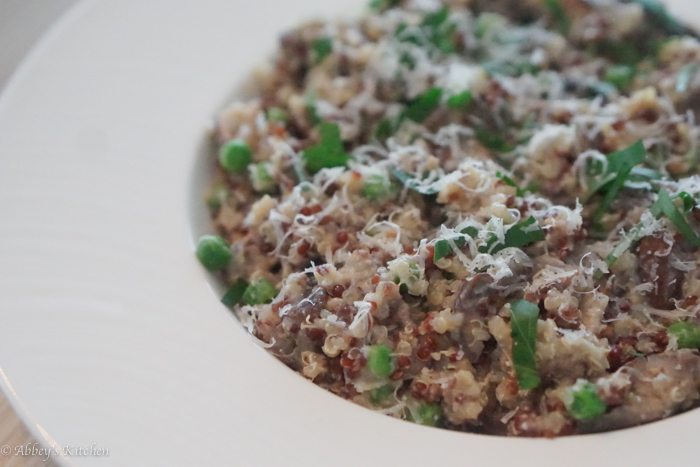 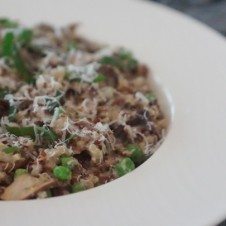 Disclaimer: The author has received consideration from Sobeys or Sobeys’ media partners in exchange for this content.  Sobeys has not reviewed these claims and is not responsible for the content. 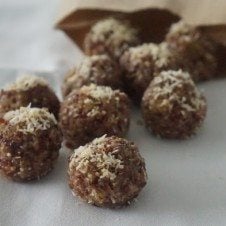 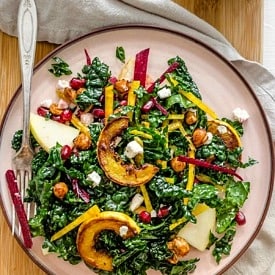 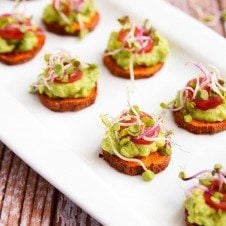 This website uses cookies to improve your experience while you navigate through the website. Out of these, the cookies that are categorized as necessary are stored on your browser as they are essential for the working of basic functionalities of the website. We also use third-party cookies that help us analyze and understand how you use this website. These cookies will be stored in your browser only with your consent. You also have the option to opt-out of these cookies. But opting out of some of these cookies may affect your browsing experience.
Necessary Always Enabled
Necessary cookies are absolutely essential for the website to function properly. This category only includes cookies that ensures basic functionalities and security features of the website. These cookies do not store any personal information.
Non-necessary
Any cookies that may not be particularly necessary for the website to function and is used specifically to collect user personal data via analytics, ads, other embedded contents are termed as non-necessary cookies. It is mandatory to procure user consent prior to running these cookies on your website.
SAVE & ACCEPT
173 shares