DISCLAIMER: This post was developed in sponsored partnership with Dainty, however, as always, all opinions are genuine.

I share my favourite recipe for vegan coconut rice pudding with mangos and kiwi as a go-to plant-based gluten free dessert. 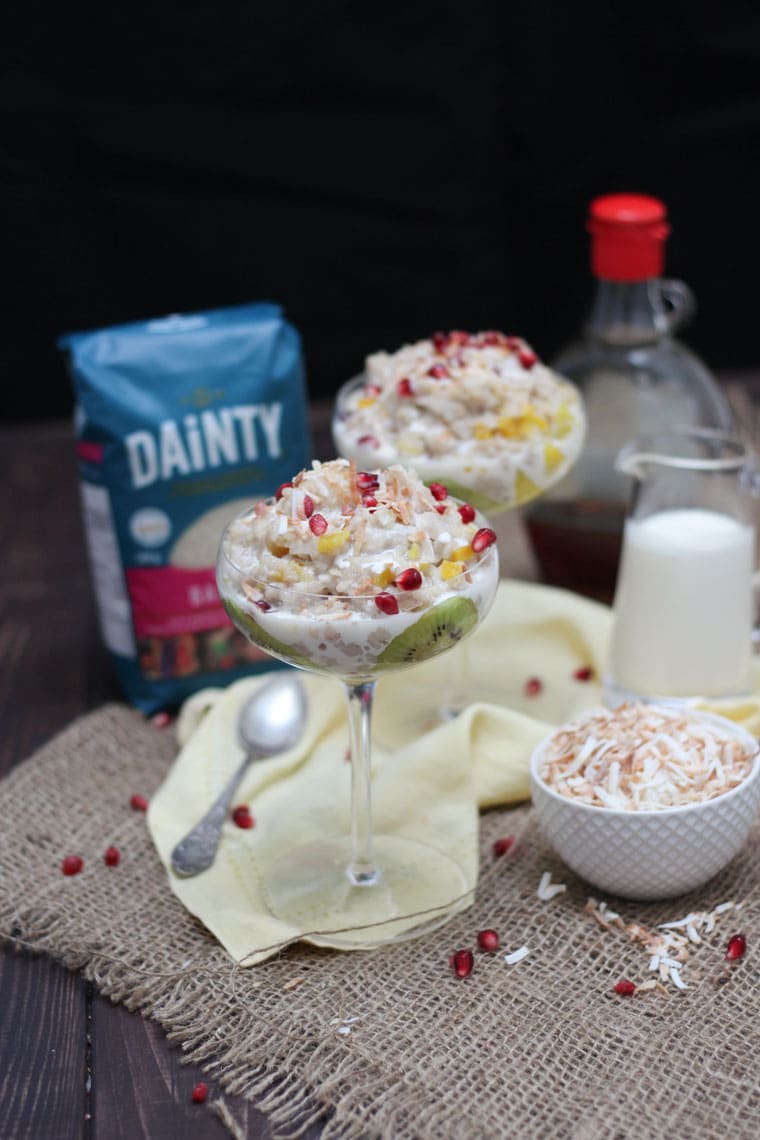 My mom was never really much of a baker. When I was growing up, there were really only two desserts she ever attempted to make. One was baked apples stuffed with oats, brown sugar and cinnamon (I’m pretty sure we had convinced ourselves that this was health food) and the other was rice pudding. My mom called it a “poor man’s dessert”, citing my grandpa’s affinity for the stuff because it made use of leftover rice. Well I never cared that it was pauper’s food, to me it always tasted like a million bucks. I love the chewy texture of the rice against the creamy consistency of the pudding and the massive amounts of cinnamon on top. And while my moms version with heavy cream is always a welcome weekend treat, I wanted to lighten this up and make a vegan coconut rice pudding with mango and kiwi. This is a perfect easy plant based gluten free dessert for entertaining because it’s something everyone at the party can enjoy, and it feels special but it’s a total sinch to pull off! 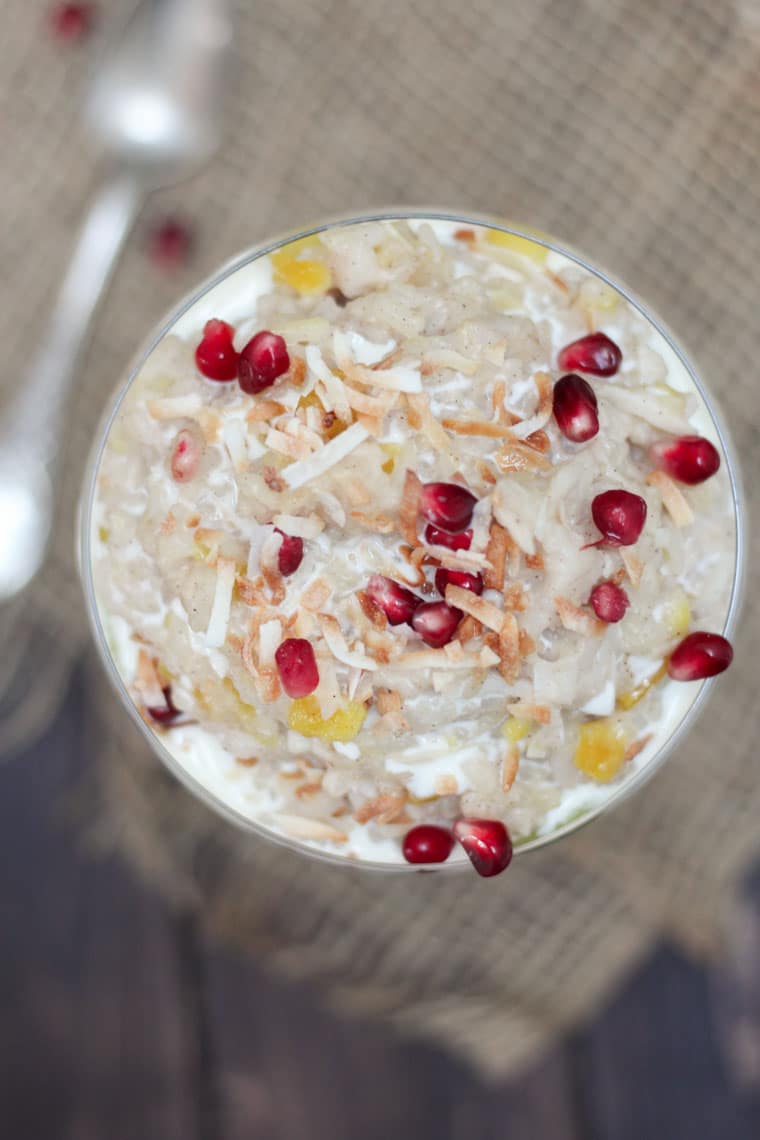 How to Make VEGAN Coconut Rice Pudding with Mango and Kiwi 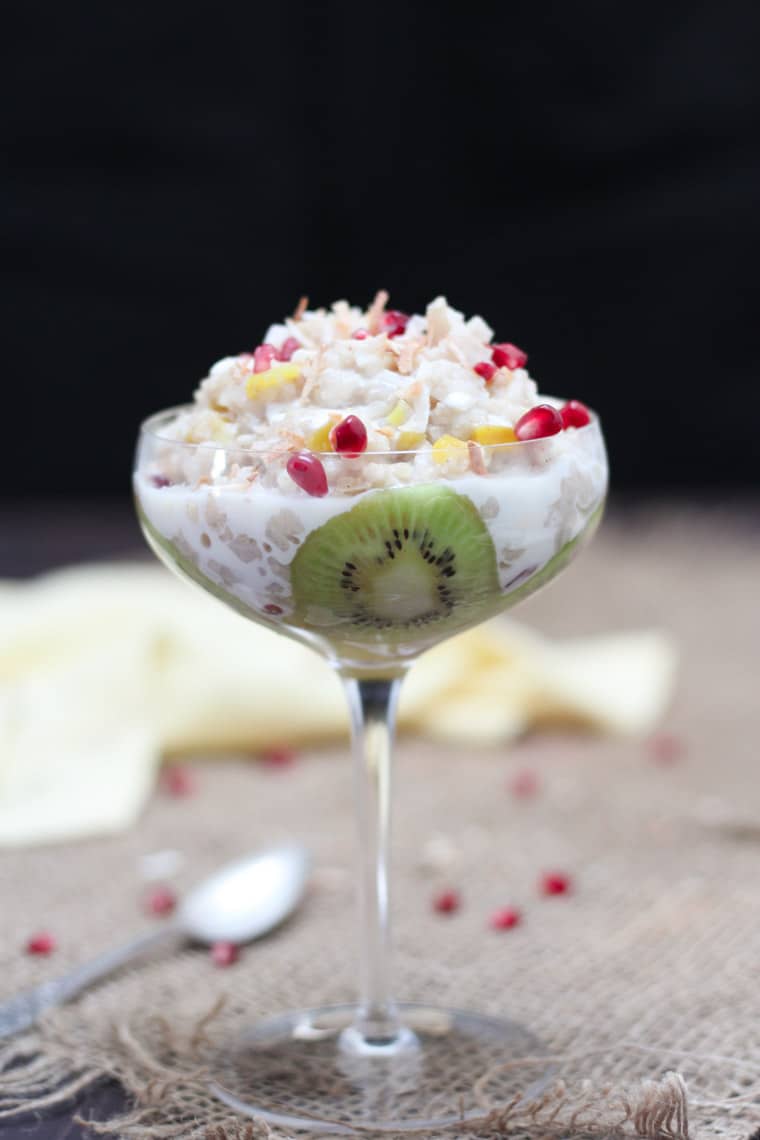 This vegan coconut rice pudding couldn’t be simpler. It starts with some leftover rice that I then cook in a can of lite coconut milk with a handful of unsweetened shredded coconut. Admittedly I never have leftover rice because my hubby is massively obsessed with the stuff and even a “massive batch” disappears by the end of the night. If you’re like my family, I suggest just making up an entire bag at a time. I love using Dainty Basmati rice for this recipe because it’s a Canadian company (celebrating its 135th anniversary!!) and is all natural, gluten free, sodium free and preservative free. It also has a gentle nutty flavour that’s amazing paired with coconut and tropical flavours.

You can totally flavour your Vegan Coconut Rice Pudding any way you’d like, but since it’s been so chilly out, I wanted to channel some warm weather vibes with a little tropical mango and kiwi. 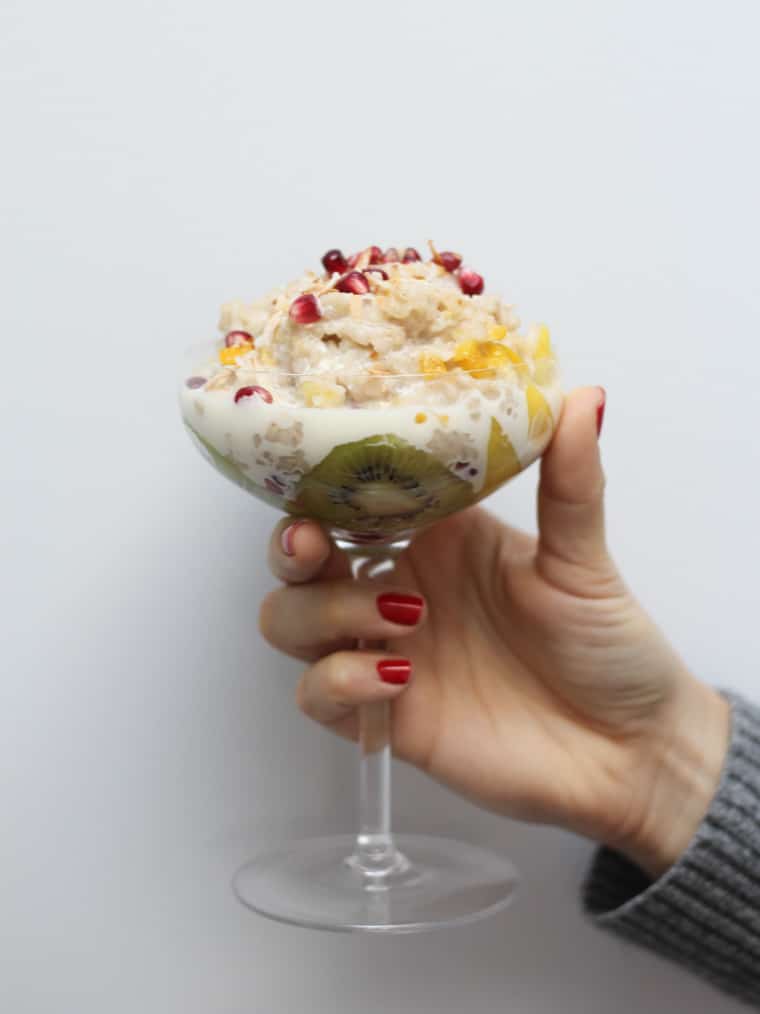 The result is a crazy fast easy plant based gluten free dessert that is great for last minute entertaining. Mom was right- rice pudding is a winner! And I think she (and grandpa!) would be proud of my vegan coconut rice pudding version.

So tell me what is the dessert your grew up eating as a child?

Have you tried making my vegan coconut rice pudding?

Leave me a comment below with your thoughts and comments!! 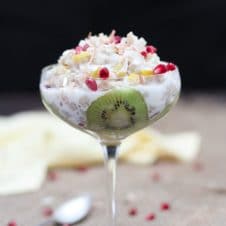 Calories: 300kcal
Tried this Recipe? Pin it for Later!Mention @AbbeysKitchen or tag #abbeyskitchen! 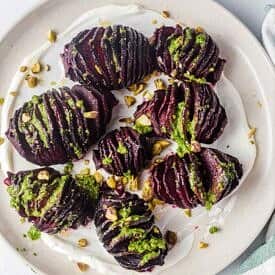 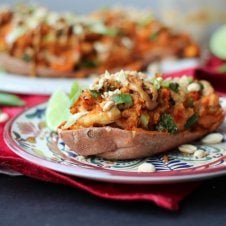 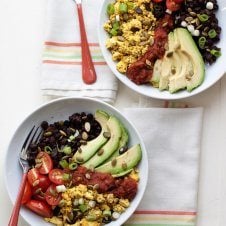 This website uses cookies to improve your experience while you navigate through the website. Out of these, the cookies that are categorized as necessary are stored on your browser as they are essential for the working of basic functionalities of the website. We also use third-party cookies that help us analyze and understand how you use this website. These cookies will be stored in your browser only with your consent. You also have the option to opt-out of these cookies. But opting out of some of these cookies may affect your browsing experience.
Necessary Always Enabled
Necessary cookies are absolutely essential for the website to function properly. This category only includes cookies that ensures basic functionalities and security features of the website. These cookies do not store any personal information.
Non-necessary
Any cookies that may not be particularly necessary for the website to function and is used specifically to collect user personal data via analytics, ads, other embedded contents are termed as non-necessary cookies. It is mandatory to procure user consent prior to running these cookies on your website.
SAVE & ACCEPT
6314 shares