DISCLAIMER: This post was developed in sponsored partnership with Mann's, however, as always, all opinions are genuine.

This vegan keto pasta alfredo is gluten free, and paleo friendly and absolutely loaded with flavour- a perfect low carb swap for a traditional pasta dinner!

Guys. Let’s talk pasta. I have no qualms about inhaling a big bowl of the regular starchy noods, but I think healthy eating is all about balance and compromise. When you have dessert, you maybe cut back on the wine. When you have pork belly, you maybe go easy on the fried rice. And when you have a luxurious creamy alfredo sauce, you go with low carb, paleo and gluten free veggie noodles. Trust me, this vegan keto pasta alfredo is made with Mann’s Kohlrabi Linguine and is so delicious, you’ll forget about missing the carbs.

I’m all over the veggie noodles and have used them to make a wide range of low carb, gluten free pasta dishes (shout out to an Abbey’s Kitchen favourite, my Zucchini Noodle Carbonara!)

But this week, I’m switching things up from zucchini and have been LOVING these Kohlrabi Linguine noodles. As a busy new mom, Mann’s has totally taken all of the annoying work out of making spiralized veggie noodles and veggie rice in a ready-to-steam bag perfect for getting dinner on the table STAT.

Kohlrabi is actually part of the cabbage family and it has a really delicious mild semi-bitter-sweet flavour that is absolutely perfect with this vegan keto alfredo sauce. They also have just 25 calories per serving and a ton of satiating fibre, so you can face plant into that creamy sauce and still feel like you’re eating light.

To make my vegan keto pasta alfredo, I saute some garlic in olive oil, then add it to some of Mann’s steamed Cauliflower Rice (that I literally just threw in the microwave!), some soaked cashews, nutritional yeast and almond milk and puree it until very smooth. Then I give the Kohlrabi Linguine a quick saute in my pan and add the sauce just until everything is warmed through. Guys, this is one of those legit 10 minute meals you need to keep in your back pocket for crazy weeknights.

You can also experiment with some of Mann’s other new veggie noodles including their Butternut Squash Rotini and Sweet Potato Fettuccine, all of which would be delish with this vegan keto alfredo sauce.

What’s your favourite pasta dish that you would like to see me make gluten free, low carb and paleo-friendly? 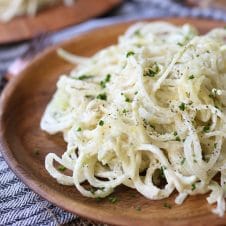 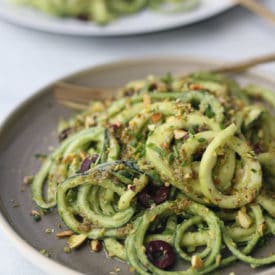 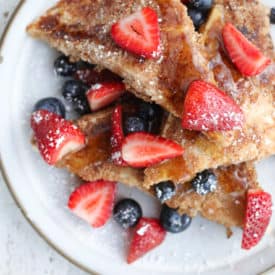 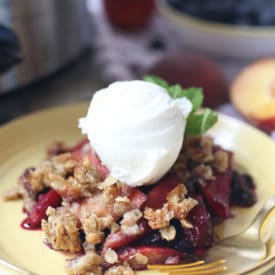 This website uses cookies to improve your experience while you navigate through the website. Out of these, the cookies that are categorized as necessary are stored on your browser as they are essential for the working of basic functionalities of the website. We also use third-party cookies that help us analyze and understand how you use this website. These cookies will be stored in your browser only with your consent. You also have the option to opt-out of these cookies. But opting out of some of these cookies may affect your browsing experience.
Necessary Always Enabled
Necessary cookies are absolutely essential for the website to function properly. This category only includes cookies that ensures basic functionalities and security features of the website. These cookies do not store any personal information.
Non-necessary
Any cookies that may not be particularly necessary for the website to function and is used specifically to collect user personal data via analytics, ads, other embedded contents are termed as non-necessary cookies. It is mandatory to procure user consent prior to running these cookies on your website.
SAVE & ACCEPT
2039 shares