This Slow Cooker Vegan Blueberry Peach Crisp will become your go-to healthy summer gluten free dessert for the crockpot to keep you from turning the oven on.

Usually when we think about slow cooker recipes we think cozy, cool weather comfort foods like stew, and soups!

I don’t know about you but I will do ANYTHING to avoid turning my oven or stove on and heating up the whole house, so the idea of throwing everything into my slow cooker and walking away from the day is TOTALLY my style. 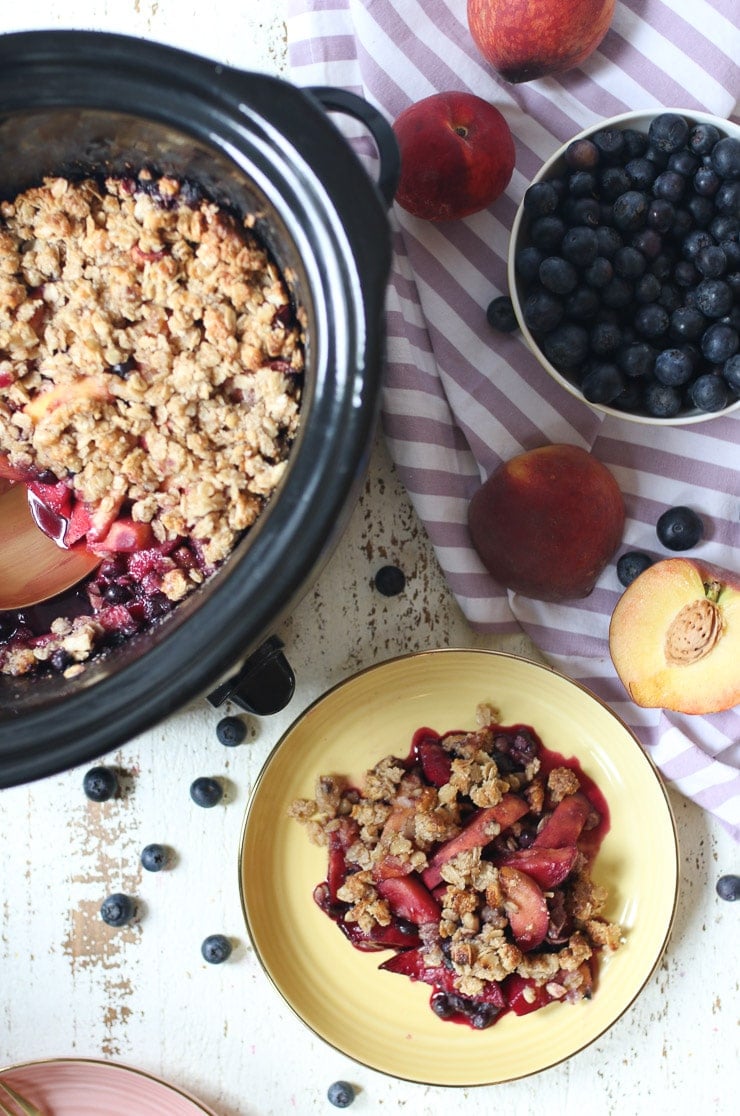 This blueberry and peach crisp easily become one of my favourite weeknight desserts that I feel good about serving Baby E because it’s packed with really delicious Summer ingredients. Peaches, blueberries, cinnamon and ginger make the fruit filling, and a combination of oats, almond meal and pecans make the crispy crunchy topping. It’s tasty enough for dessert, but balanced enough that I have no qualms about serving it with a dollop of yogurt for breakfast.

When you’re choosing peaches for this slow cooker vegan fruit crisp, I highly suggest looking for FREESTONE peaches whenever possible. It will make it SO much easier to get the flesh away from the stone since CLINGSTONE don’t just pop away so easily. They like to hug those pits like their life depends on it and it MAKES. ME. CRAZY. I mean, it’s still totally doable to just cut around it, but you end up with a mango-like issue where you waste some of the fruit (or you just have to eat those stuck on bits. It’s rough, I know.)

How do You Make Slow Cooker Vegan Blueberry Peach Crisp ACTUALLY Crisp and Golden on Top? 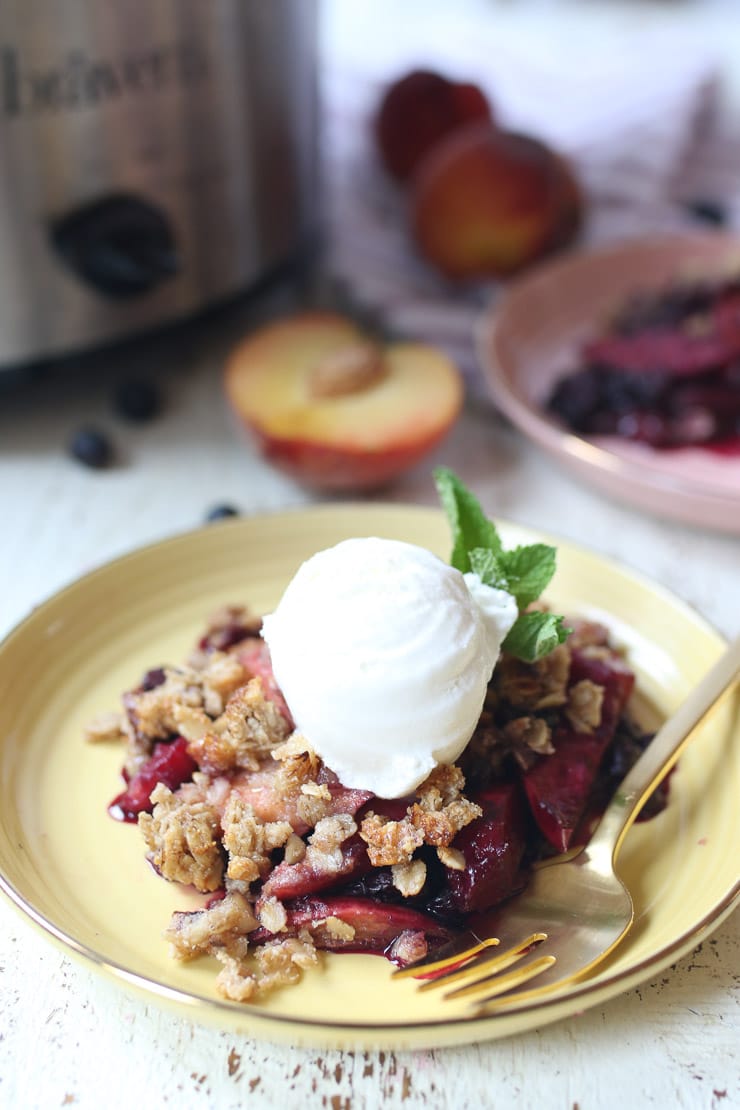 Okay so when I was thinking about making a blueberry fruit crisp recipe, I thought, how the F is it going to crisp up when there’s a lid trapping in all the moisture? Well, here’s the trick, my friends – a double folded piece of paper towel! As the moisture from the fruit rises to the top, it gets absorbed by the paper towel so that the topping can crisp up. If we skipped this step, the moisture would fall back onto the crisp topping and it would get soggy.

I DON’T WANT NO UNCRISP- CRISP.

Is this Blueberry Peach Crisp Vegan AND Gluten Free? 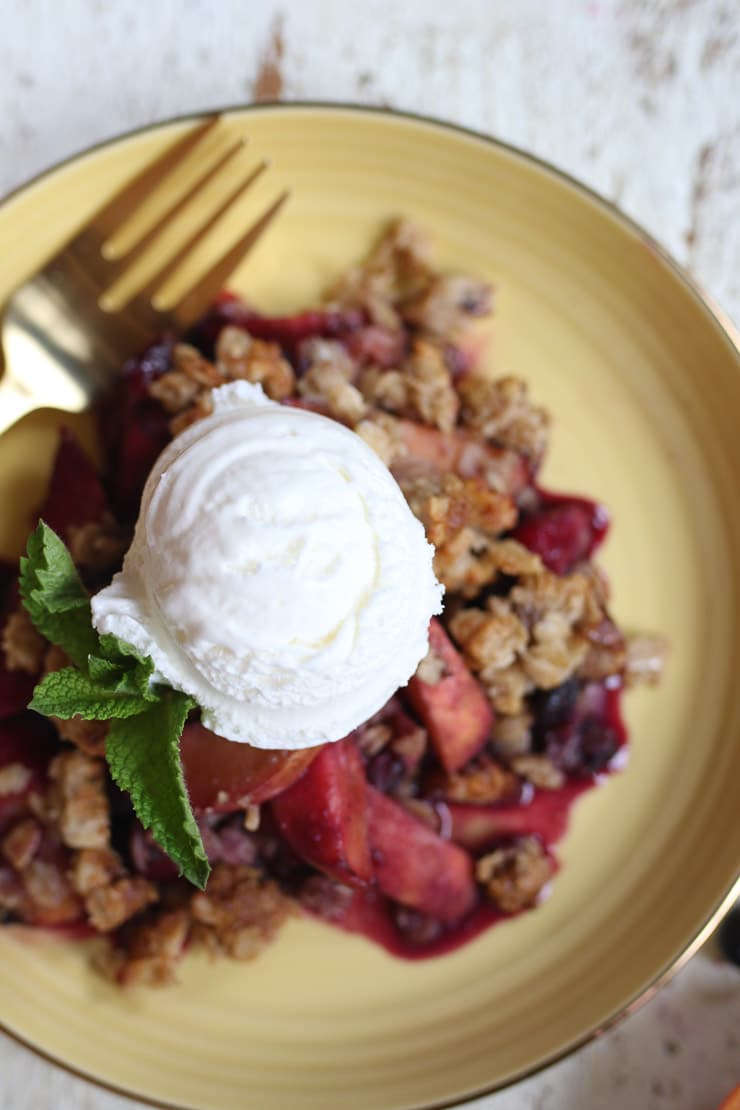 Can You Make Slow Cooker Apple Crisp or Use Other Fruits? 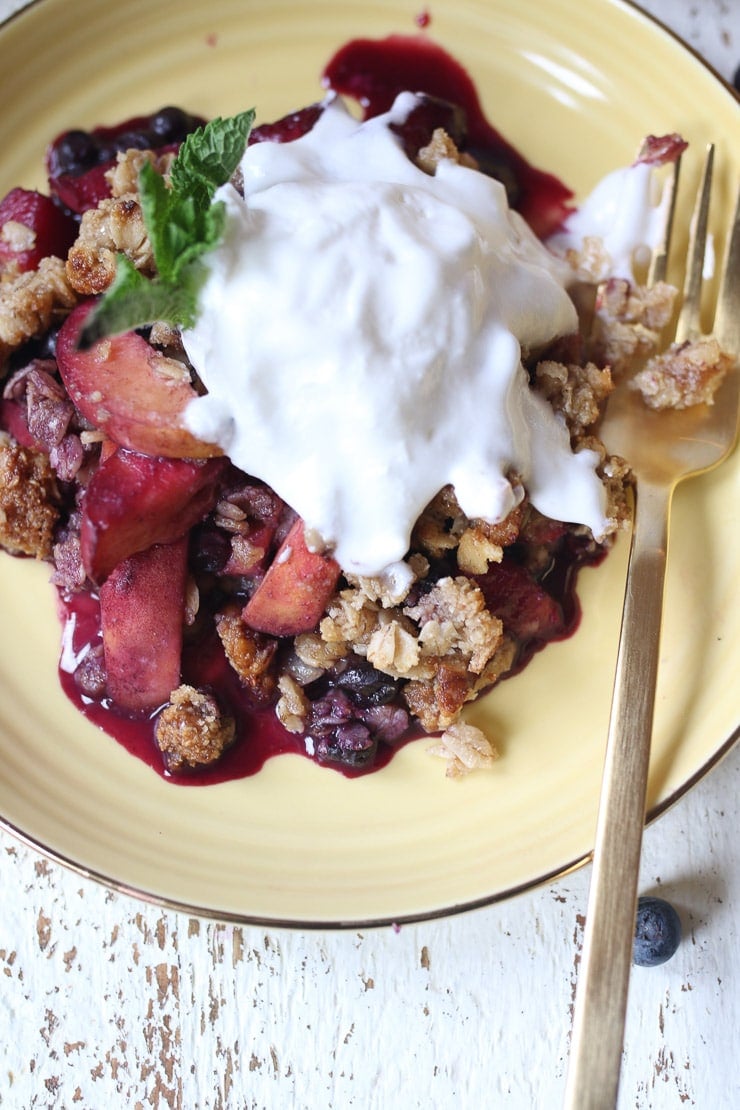 OMG YES. That is the beauty of this recipe. It will become a staple! Just swap in your favourite fruit and go for it. I love the classic late summer combination of blueberries and peaches, but do strawberry rhubarb in the Spring (may need a bit more sugar), apples or pears in the fall (may need a bit more time), and mango any time around! 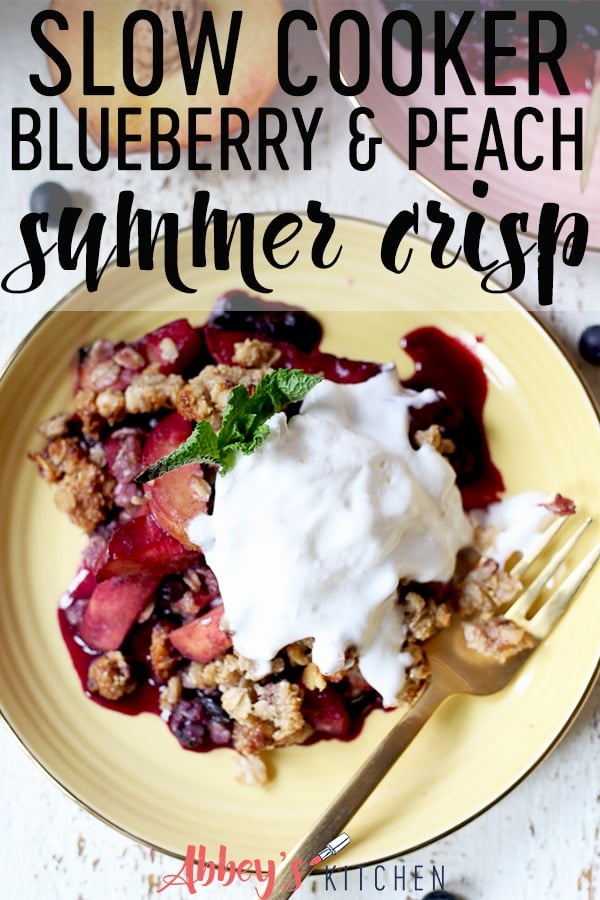 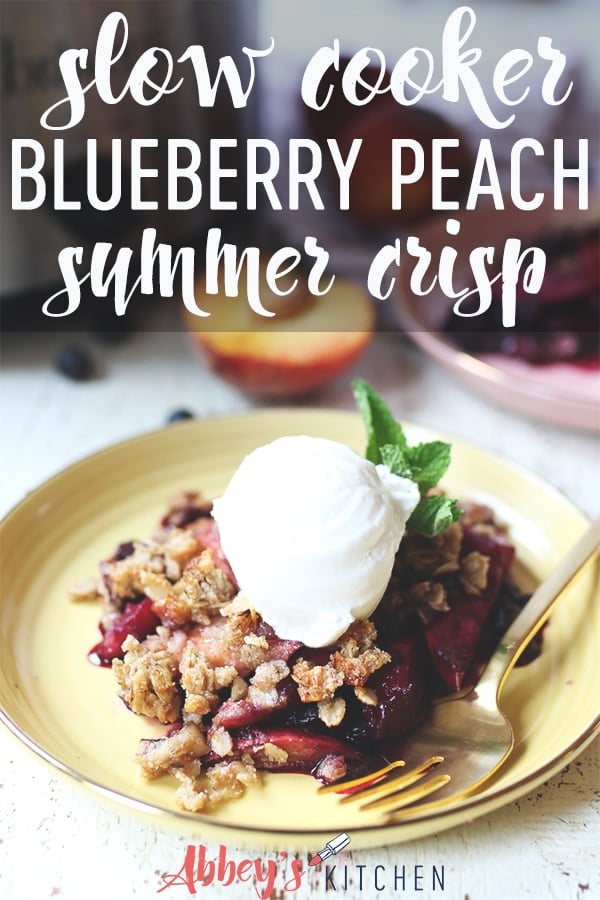 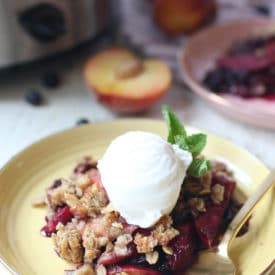 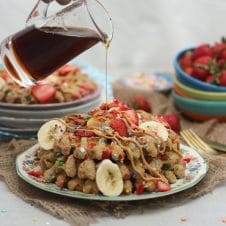 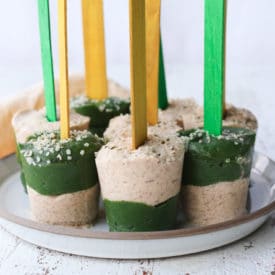 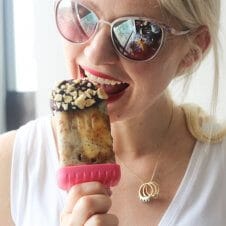 This website uses cookies to improve your experience while you navigate through the website. Out of these, the cookies that are categorized as necessary are stored on your browser as they are essential for the working of basic functionalities of the website. We also use third-party cookies that help us analyze and understand how you use this website. These cookies will be stored in your browser only with your consent. You also have the option to opt-out of these cookies. But opting out of some of these cookies may affect your browsing experience.
Necessary Always Enabled
Necessary cookies are absolutely essential for the website to function properly. This category only includes cookies that ensures basic functionalities and security features of the website. These cookies do not store any personal information.
Non-necessary
Any cookies that may not be particularly necessary for the website to function and is used specifically to collect user personal data via analytics, ads, other embedded contents are termed as non-necessary cookies. It is mandatory to procure user consent prior to running these cookies on your website.
SAVE & ACCEPT
153 shares