This Vegan Gluten Free Ginger Pear Crisp is packed with flavour but is completely gluten free, lower in sugar and packed with fibre!

Everyone has that special meal or dish that reminds them of their childhood. If I were to only choose one, I would say that for me that dish was apple crisp. My grandma used to make the best apple crisp ever, and I’m pretty sure her secret was just lots and lots of brown sugar. Omg it was really really good.

While I love a good classic apple crisp, I am also all for switching this up and my vegan gluten free ginger pear crisp totally hits the spot. It’s got a little zippy kick from the ginger, and features one of my favourite winter fruits- pear! Pear is packed with fibre and is so sweet and delicious, and really pairs (ha, see what I did there) well with ginger!

first of all, what’s the difference between a crisp, cobbler and crumble?

what do i need to make this ginger pear crisp 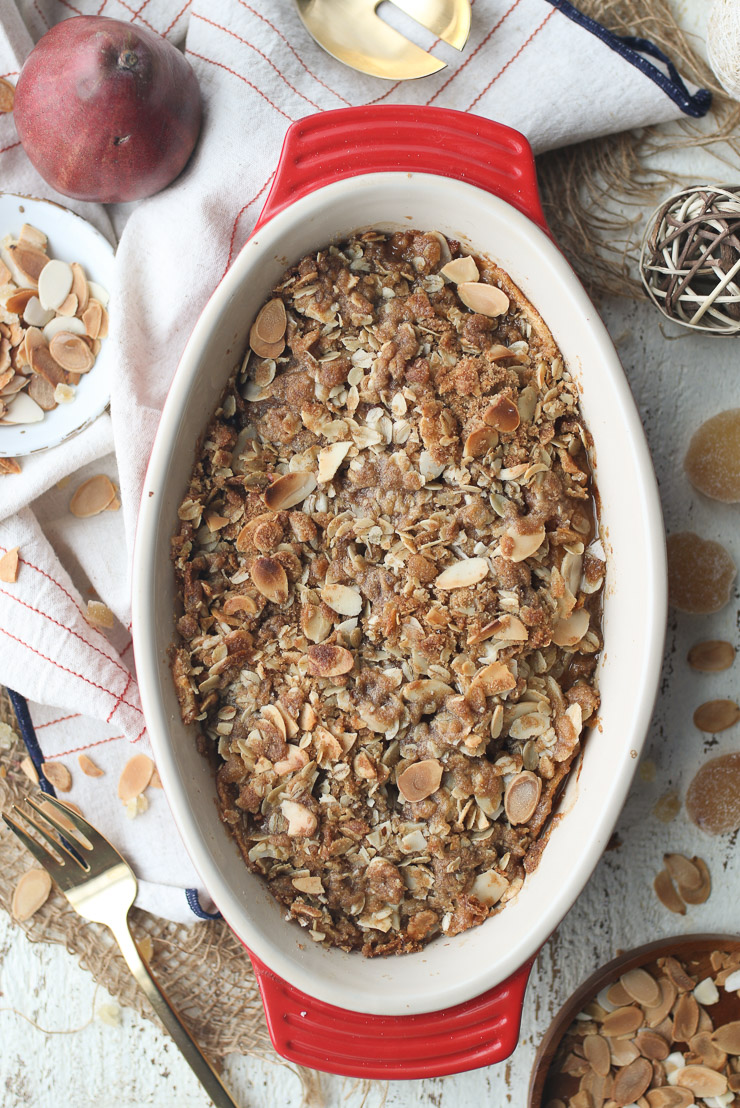 To make this healthy and easy pear crisp recipe, you will need:

how do i make this crisp recipe gluten free and vegan 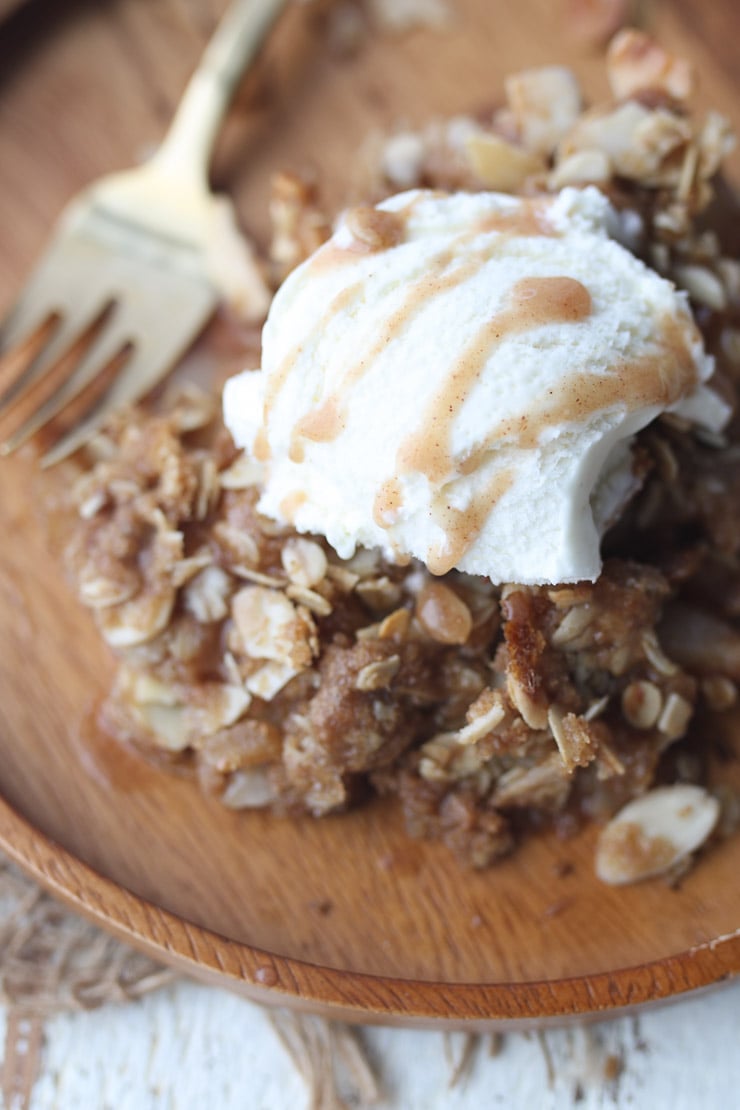 This healthy dessert recipe is super easy and has mainly ingredients you likely already have at home. I start by making the oat crisp topping with flour (gluten free if needed), oats (gluten free if needed), brown sugar, and spices and then mashing in some cold butter (vegan or regular) until you have little bits of butter mixed in with the sugar and flour.

To make the filling, I toss my pears with sugar, maple syrup, a little cornstarch, lemon, vanilla and spices.

Fill a casserole dish with the filling and top it off with the crisp topping. Then bake it off until bubbling and golden brown.

what kind of pears should i use?

I love anjou pears in this because they’re semi firm, but if you find a firm bartlett those would also work well! I would save any super soft pears for snacking because you don’t want the filling to be mush before the crisp topping browns.

can i substitute pears for apples and make vegan gluten free apple crisp?

You can easily make this into a vegan gluten free apple crisp recipe!

could this vegan pear crisp be made in the slow cooker?

I haven’t tested this gluten free ginger pear crisp in my slow cooker but I have made a berry crisp in the slow cooker and it turned out amazing! The secret is in this post about the berry crisp here.

can i make mini individual portions of this gluten free pear ginger crisp?

I love making individual fruit crisp desserts for dinner parties in little ramekins. I would reduce the cooking time to 20-25 minutes and just check on the pear texture by spearing a little piece out of the corner.

how long will this crisp last in the fridge?

It’s so tasty as a decadent breakfast topping on yogurt for days later, even though it will lose its crunchy crisp topping after being stored. But it will stay good to eat for 4 to 5 days. 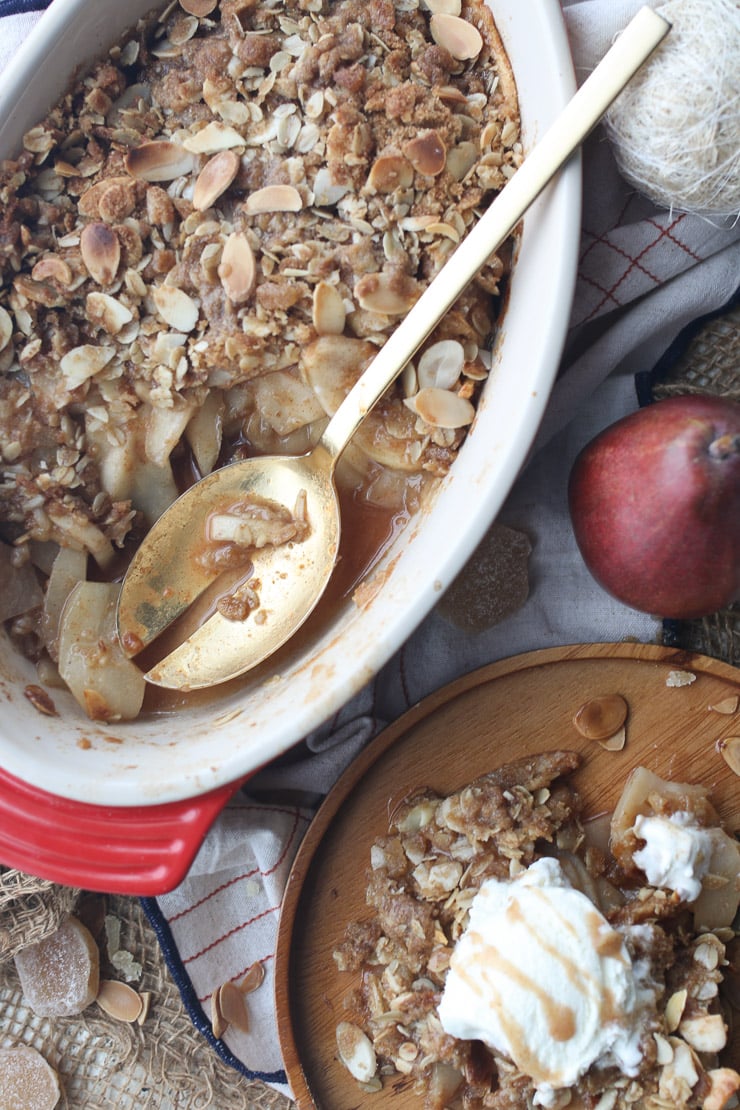 Tell me, are you team crisp, crumble, cobbler, pie or something else?

What is your favourite childhood food memory? 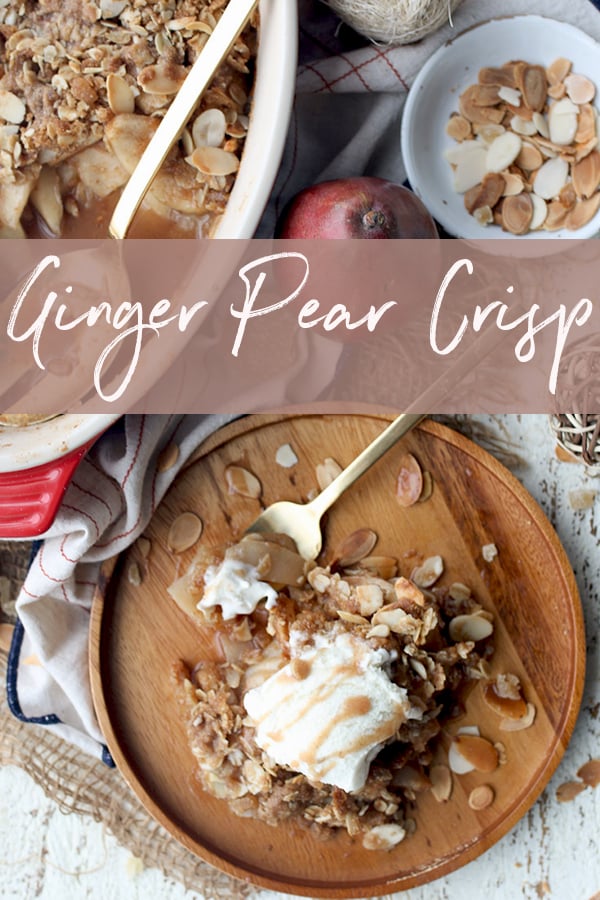 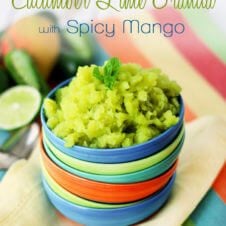 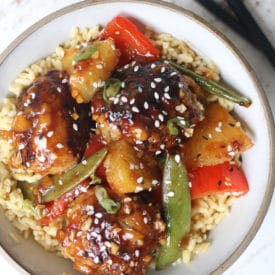 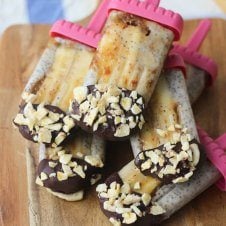 This website uses cookies to improve your experience while you navigate through the website. Out of these, the cookies that are categorized as necessary are stored on your browser as they are essential for the working of basic functionalities of the website. We also use third-party cookies that help us analyze and understand how you use this website. These cookies will be stored in your browser only with your consent. You also have the option to opt-out of these cookies. But opting out of some of these cookies may affect your browsing experience.
Necessary Always Enabled
Necessary cookies are absolutely essential for the website to function properly. This category only includes cookies that ensures basic functionalities and security features of the website. These cookies do not store any personal information.
Non-necessary
Any cookies that may not be particularly necessary for the website to function and is used specifically to collect user personal data via analytics, ads, other embedded contents are termed as non-necessary cookies. It is mandatory to procure user consent prior to running these cookies on your website.
SAVE & ACCEPT
29 shares