This gluten free poached apples with turkey stuffing and pomegranate will become an instant holiday tradition!

A lot of people are asking me for healthy winter recipes to enjoy between their indulgent holiday meals. You’ve been asking for more gluten free recipes, easy healthy dinner recipes, and even some weeknight takes on holiday flavours (hence this turkey stuffing idea). 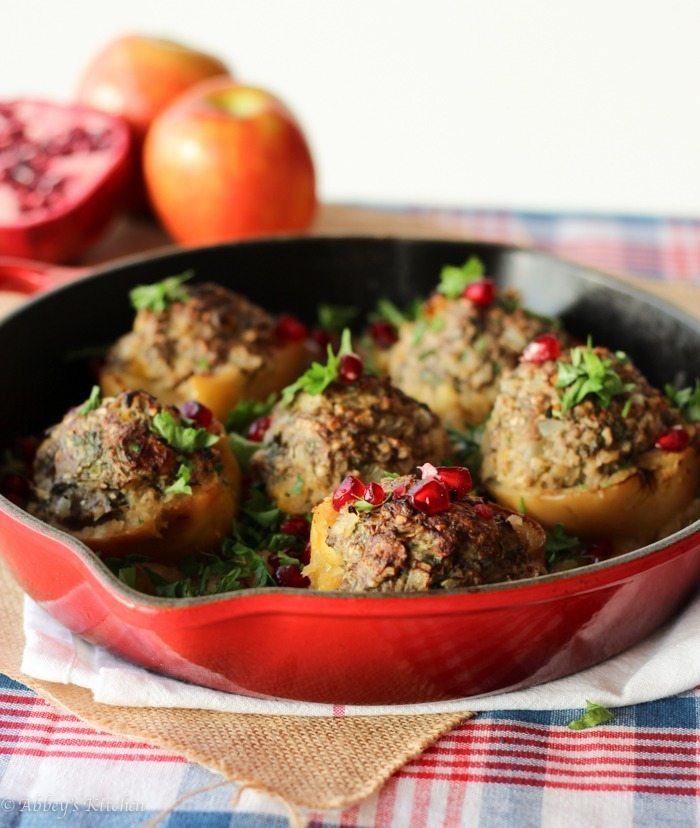 So when this months #TheRecipeRedux asked us to open our favourite cookbooks and put our spin on a great looking recipe, I knew what I was looking for. I hadn’t seen a specific apple turkey stuffing recipe but I knew I could put a spin on a fruit based lamb or beef stuffing concept. 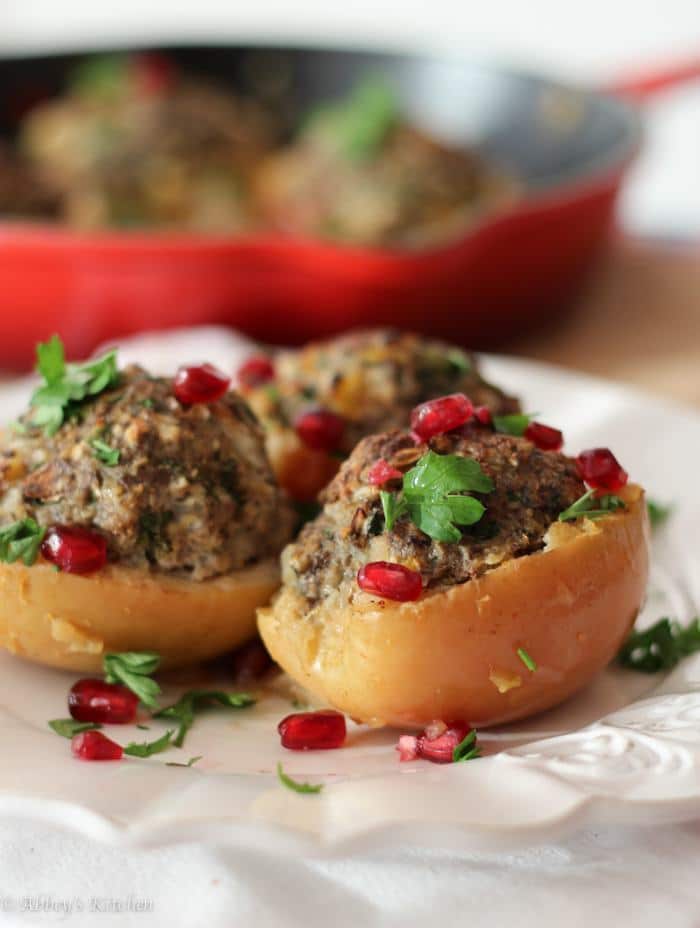 The key was finding a recipe like that in my massive stack of cookbooks. Since the Recipe Redux has been around for a whopping 54 months, we were instructed to open our books to the 54th or 154th page and get in to work in our kitchens. 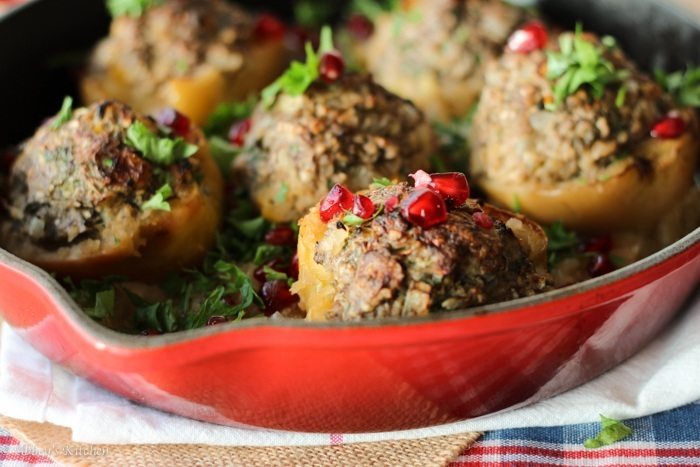 I remembered Yotam Ottolenghi’s book Jerusalem, probably one of my favourites, featured a stuffing style recipe – Lamb-Stuffed Quince with Pomegranate and Coriander and I honestly could not resist. So, no, not turkey stuffing, but definitely something I could gather some inspiration from. 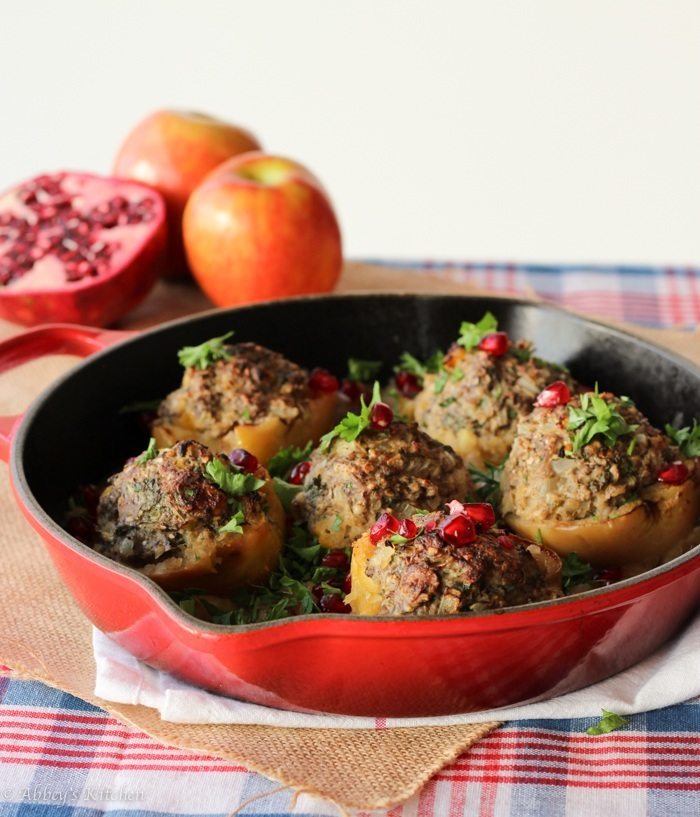 So How Did Lamb Become Turkey Stuffing?

So yah, I changed pretty much everything about the recipe. The lamb got substituted for extra lean ground turkey stuffing and minced mushrooms to cut fat (and also make a turkey stuffing for a holiday feel). The quince made way for apples, which are cheaper and more readily available. The breadcrumbs got swapped out for gluten free oats to make it an easy gluten free dinner recipe. I also changed amounts as I went (I thought it was way too much onion), altered spices and herbs, added dried fruit, and cut fat. I even changed the method to include a trip under the broiler so the ground meat didn’t look so pale and sad having been virtually poached in a apple-steam bath. 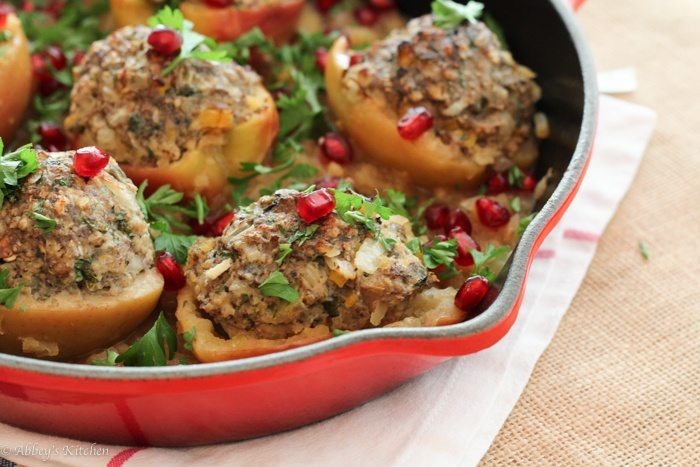 In the end, I was really, really happy with it. My fiancé and I gobbled it up and I ate the turkey stuffing leftovers for breakfast. Yes, I ate it for breakfast BECAUSE THE FLAVOURS WERE LEGIT BREAKFAST-Y. Don’t judge, guys. 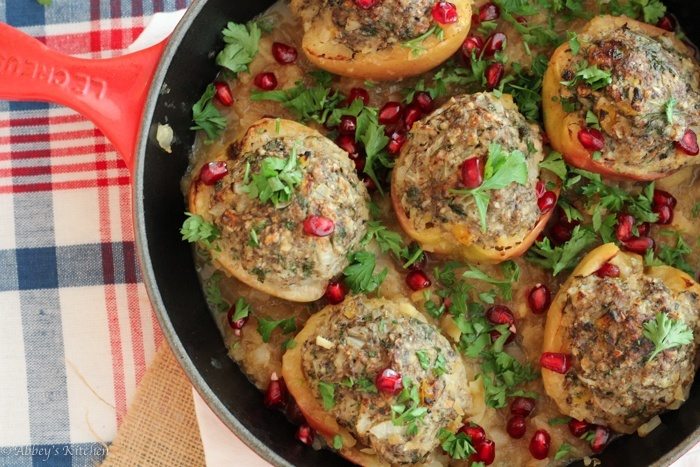 Love this idea for a gluten free turkey stuffing? Leave me a comment below with some of your favourite turkey recipes! 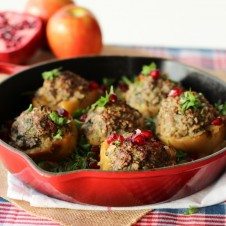 Calories: 420kcal
Tried this Recipe? Pin it for Later!Mention @AbbeysKitchen or tag #abbeyskitchen! 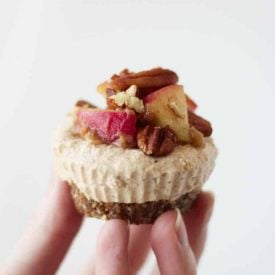 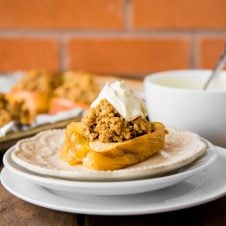 This website uses cookies to improve your experience while you navigate through the website. Out of these, the cookies that are categorized as necessary are stored on your browser as they are essential for the working of basic functionalities of the website. We also use third-party cookies that help us analyze and understand how you use this website. These cookies will be stored in your browser only with your consent. You also have the option to opt-out of these cookies. But opting out of some of these cookies may affect your browsing experience.
Necessary Always Enabled
Necessary cookies are absolutely essential for the website to function properly. This category only includes cookies that ensures basic functionalities and security features of the website. These cookies do not store any personal information.
Non-necessary
Any cookies that may not be particularly necessary for the website to function and is used specifically to collect user personal data via analytics, ads, other embedded contents are termed as non-necessary cookies. It is mandatory to procure user consent prior to running these cookies on your website.
SAVE & ACCEPT
480 shares